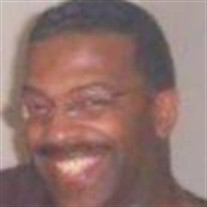 Albert Nelson Morrow Jr. of Peoria, IL went home to be with the Lord at 10:15 pm on Wednesday, December 26, 2018 at Kindred Hospital, Peoria, IL. Albert was born on August 19, 1966 to Albert Sr. and Ruthie Mae (Gillespie) Morrow. He was the first born of seven children. Albert was a very shy and quiet child. He liked to draw Superman and Spiderman superhero characters. He also enjoyed reading and would often go to the Harvey Library. When he discovered a topic of interest, he would do research on it and document everything on paper. Albert was very talented at drawing and a few of his teachers helped him attend the Art Institute of Chicago for a few classes while in high school. At the age of 14, Albert accepted Jesus Christ as his Lord and Savior while attending the Apostolic Pentecostal Church of Morgan Park in Chicago, Illinois. He walked with the Lord for the remainder of his life. Albert graduated from Thornton Township High School in 1984 and took a few more classes at the Art Institute after graduation. He was then encouraged by his mother to join the military. Albert joined the Army Reserves in Arlington Heights in Oct of 1985 as an Apprentice Graphics Specialist. In April of 1986, he transferred to the 933 Military Police Company in Chicago, Illinois to become a Military Policeman. He separated from the National Guard with an honorable discharge in May of 1990 with the rank of PFC. Albert moved to Peoria, IL with is sister, Tonia, in August of 1992 where he met the love of his life, Elizabeth Excenia Hope Cannon, and they were married on June 15, 1996. She had one daughter, Jessica Cannon, prior to their marriage. No children were born to this union. In 2000, Albert joined New Life Christian Church, the church home of his wife. They were married for 19 years and 10 months at the time of her passing on April 15, 2016. Albert was diagnosed with sarcoidosis in 2002 when his health began to decline. After his wife’s passing, Albert’s health took a drastic change for the worse. He was not able to attend his beloved wife’s funeral because the day before he was admitted into the hospital because of a minor stroke and cardiac arrest due to congestive heart failure. Due to his deteriorating health in the spring of 2016, he was unable to return to work. At the time of his passing, he worked as an aide at CWTC, a residential facility. Albert is survived by his father, Albert Morrow Sr. of Harvey, IL; his stepdaughter, Jessica Cannon of Edwardsville, IL; six sisters, Tonia (Michael) Dolan of Peoria, IL, Tammie Morrow of East Chicago, IN, Teena (Fred) Hayman of Chicago, IL, Tiffany (Alvin) Miller of Wynne, AR, Tracy (Marion) Smith of Parkin, AR, and Teresa Morrow of Chicago, IL, and a host of nieces, nephews, aunts, uncles, and cousins. He was preceded in death by his beloved wife, Elizabeth Excenia Hope Morrow and loving mother, Ruthie Mae Morrow. A Memorial service will be held at 11 am on Saturday, December 19, 2019 at New Life Christian Church in West Peoria, IL with a visitation beginning at 10 am. Bishop Harold Dawson, Jr. will officiate. Simons Mortuary has been entrusted with arrangements. Online condolences maybe at SimonsMortuary.com.

Albert Nelson Morrow Jr. of Peoria, IL went home to be with the Lord at 10:15 pm on Wednesday, December 26, 2018 at Kindred Hospital, Peoria, IL. Albert was born on August 19, 1966 to Albert Sr. and Ruthie Mae (Gillespie) Morrow. He was the... View Obituary & Service Information

The family of Mr. Albert Nelson Morrow Jr. created this Life Tributes page to make it easy to share your memories.

Albert Nelson Morrow Jr. of Peoria, IL went home to be with the...

Send flowers to the Morrow family.