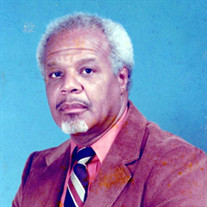 Mr. Alfred Stapleton Jr. 89, passed away peacefully at home on Tuesday, December 14, 2021, in Los Angeles after a long battle against a number of health issues. Alfred was born in Peoria Illinois on July 16, 1932. He was the first child of Alfred Sr. and Mary Stapleton. His parents and youngest brother George Stapleton Sr. preceded him in death. Alfred received his formal education at Manuel High School (Peoria IL), where he was a member of the undefeated Varsity football team. Upon graduation, Alfred enlisted in the United States Navy and proudly served his country during the Korea War aboard the USS Baltimore. After completing his military commitment Alfred returned to Peoria, where he briefly attended Bradley University and worked at Caterpillar Inc. and Keystone Steel and Wire. Soon thereafter he married his former wife Kirbie Luckey. The marriage produced two sons, Kevin Sr. and Jeffrey Sr. In 1962 Alfred relocated his family to Los Angeles, where he began his career with the United States Postal Service. He worked a total of 30 years, and promoted to the rank of Supervisor at the Mar Vista office. Alfred enjoyed sports and was a diehard Chicago Bears, Boston Celtics and Los Angeles Dodgers fan. Alfred also enjoyed playing softball. During his career with the Post Office Alfred participated in weekly games as the shortstop for the “USPS Bombers”, until a knee injury ended his playing days. After retiring, Alfred began his second career as a Photographer. Word spread about the quality of his work and he soon started receiving request for photo shoots. He photographed weddings, graduations, social events and scenic pictures. Some of his photos were published alongside featured stories in the Inglewood Sentinel newspaper. However, Alfred truly enjoyed taking pictures of the K9 trainers and their dogs at Kenneth Hahn Park on the weekends. In his spare time Alfred also enjoy traveling. When he wasn’t taking pictures, you would find him traveling the country participating in bowling tournaments. Alfred also had a zest for life. He enjoyed his family, friends, playing cards, dominos and having fun. If you knew “Al” you knew he was a “to the point” person. He didn’t play favorites or pull his punches. If you asked him a question, he gave you his honest answer, regardless if you liked his opinion or not. He was no nonsense. Alfred was beyond reproach. He carried himself in a dignified manner and was an extremely loyal person that took care of his responsibilities. He will be truly missed. He leaves to cherish his memory: two sons: Kevin Sr and Jeffrey Sr (Wife Angie), five grandchildren: Cherron Cordier (Husband Takebb Cordier), Kevin Jr (Wife Erica), Kristen, Jeffrey Jr., Jerin, six great grandchildren: Abel Martinez, Xenyla, Syanna, Paris, Jeremiah, and Adrian, one sister: Dorothy Lamon (husband Melvin Lamon), two brothers: Donald Stapleton, Sr. and Richard Stapleton, very special friends: Etha Robinson and Odessa Brumfield and a host of nieces, nephews, and friends. Funeral service were held at 10 am on Wednesday, January 5, 2022 at Angelus Funeral Home, Los Angeles, CA. Pastor Glenn Jones was the officiant. Alfred was laid to rest at Riverside National Cemetery, Riverside, CA. Angelus Funeral Home, Los Angeles, CA was entrusted with funeral arrangements.

Mr. Alfred Stapleton Jr. 89, passed away peacefully at home on Tuesday, December 14, 2021, in Los Angeles after a long battle against a number of health issues. Alfred was born in Peoria Illinois on July 16, 1932. He was the first child of... View Obituary & Service Information

The family of Mr. Alfred Stapleton Jr. created this Life Tributes page to make it easy to share your memories.

Mr. Alfred Stapleton Jr. 89, passed away peacefully at home on...

Send flowers to the Stapleton family.