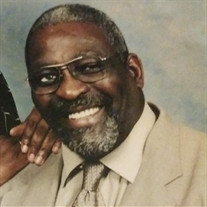 Allen Alexander Sanders, Sr., 79, of Peoria, IL transitioned at 1:24 am on Tuesday, May 1, 2018 at Richard L. Owens Hospice Home surrounded by his family. Allen was born on April 29, 1939 in Peoria, IL to Primus, Sr., and Caroline (Bankston) Sanders. Allen married Vergure Shaffer in 1963 and to that union five children were born; Roshann, Michelle, Yvette, Gynene and Allen, Jr. Vergure Sanders and two daughters, Roshann and Michelle preceded him in death. He later married Mary Young and together raised children, Kevin, Kenneth, Michael, Karen, MaryAnn, Kimberly, Leslie, Dava, Crystal, Chatiqua and Tamika. Mary Sanders, one son, Michael and one daughter, Crystal preceded Allen in death. Allen worked 45 years as a laborer at Carver Lumber Company. In his youth, Allen was both an amateur wrestler and arm wrestler. He was sponsored by the Carver Lumber Company to participate in nationwide tournaments. He excelled in the two sports winning many awards, even to taking 2nd place in a national arm wrestling tournament. Allen was an avid CB user with two handles, Sky Pilot and 999. Allen was a former member of the Peter H. Clark Elks Lodge #483 where he was past Captain and past Head Drill Master. Allen was a faithful member and deacon at Faith Tabernacle C.O.G.I.C. and former member and deacon at Kingdom Temple C.O.G.I.C. Allen leaves to cherish his most precious memory his loving family, Yvette (Ronald) Gamble and Allen, Jr. (Hope) Sanders both of Peoria and Gynene Sanders of San Antonio, TX; Kevin (Melissa) Young, Karen, MaryAnn, Kimberly, Leslie, Dava (Thomas) Davis, Chatiqua (Joseph) Herron and Tamika all of Peoria and Kenneth Young of New Orleans, LA; two sisters, Marilyn Jackson of Peoria and Meri Sanders of Chatsworth, CA; a lifelong friend, Roger Fleming, Sr.; one granddaughter, Alycia Nicole Sanders and a host of other grand and great grandchildren, nieces, nephews, cousins and other relatives and friends. He is also preceded in death by his parents and two brothers, Primus Sanders, Jr. and Larry Sanders. Funeral services will be held at 11 am on Saturday, May 5, 2018 at Faith Tabernacle C.O.G.I.C. with a visitation beginning at 10 am. Elder Felton Beck, Jr., will officiate. Simons Mortuary has been entrusted with arrangements. Online condolences may be made at simonsmortuary.com.

Allen Alexander Sanders, Sr., 79, of Peoria, IL transitioned at 1:24 am on Tuesday, May 1, 2018 at Richard L. Owens Hospice Home surrounded by his family. Allen was born on April 29, 1939 in Peoria, IL to Primus, Sr., and Caroline (Bankston)... View Obituary & Service Information

The family of Mr. Allen Alexander Sanders Sr. created this Life Tributes page to make it easy to share your memories.

Send flowers to the Sanders family.