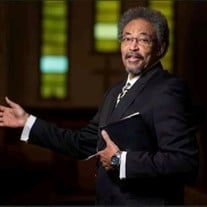 Reverend Alphonso Lyons Jr., 72, of Peoria, Illinois transitioned from this life to his heavenly home on Tuesday, September 21, 2021 at OSF St. Francis Hospital, Peoria, IL. Alphonso Lyons, Jr., was born to Alphonso, Sr., and Ellora (Derrick) Lyons on March 22, 1949. A native of Peoria, Alphonso Lyons graduated from Manual High School in 1967. He went on to graduate from Bradley University in 1971 with a bachelor’s degree in Sociology and Religious studies. He later received a master’s degree in Education and Administration from Bradley. An avid reader, Reverend Lyons will tell you some of his biggest influencers were Dr. Fred Sampson, and Dr. E.V. Hill. A bibliophile he maybe, he was most influenced by the teachings of Jesus Christ. In 1966, while a young member of Grace Baptist Church, Alphonso made it known that he had been called to the ministry of Christ. Ordained in 1974, he served as an Assistant Pastor under the guidance of Dr. Wendall R. Phillips at Mt. Zion Baptist Church. Shortly after being ordained, Dr. Phillips accepted a pastoral position at another church in Pennsylvania. May 1974, Rev Lyons began serving as interim pastor at Mount Zion Baptist Church. October of 1974, the church selected him as the head Pastor. Reverend Alphonso Lyons Jr., has been instrumental in providing leadership to Mount Zion Baptist Church since 1974. An effective communicator and teacher of God’s word, he is known for his gentleness and dynamic teaching styles. He dedicated his life to his church and the community in Peoria. Pastor Lyons served on numerous boards and committees that included the Peoria Area Ministerial Alliance, Chairman of the Peoria Christian Leadership Council, Moderator of the Central District Congress, past President Central District Association, Baptist General State Conventions and Illinois Peoples Action. Always looking for ways to make his church and the community more financially grounded, he founded METEC, Mt Zions’ Effort to Equip the Community. METEC is a community development corporation that provides resources that helps families and individuals with housing and employment. He has served on METEC’s board since its inception in 2001. Never wanting to be seen but always willing to be that pillar of support, additional organizations and accomplishments that Pastor Lyons dedicated his life too include: • Current Chairman of Board of PCLC (Peoria Christian Leadership Council) • Current member of the Peoria Baptist Ministerial Alliance • Current member of PMEDO (Peoria Ministerial Economic Development organization) • Member of Committee to establish a Peoria Charter School • Current member Peoria Lion’s Club • Current Board Member of Manual High School Advisory Board • Former contributing writer to the religious column of the Peoria Journal Star • Past President Central District Congress • Past Corresponding Secretary for Baptist General State Convention of Illinois (2002-2008) • Past instructor for Central District Congress • Past instructor for Baptist General State Convention of Illinois (1976-1979) • Past secretary PAMA (Peoria Area Ministerial Association) Affectionally known as “Rev” by his family and students. Alphonso was a substitute teacher for Peoria Public Schools for many years. He taught several subjects including French. Children were the key to his heart. He believed the church should provide creative opportunities in helping motivate our youth and understand we only have a brief time to do so. Alphonso married Cheryl G. Green in 1975. From that union two children were born, Danielle and Devan Lyons. He later married Charlene Grant Coates. Together they raised five children and have a host of grandchildren and great grandchildren including Jeremiah Mudd and Julissia Mudd whom they raised. He leaves to cherish his most precious memory his loving and devoted wife, Charlene Lyons; children, Devon Lyons, Frank Coates, Willie Coates and Crystal Grant all of Peoria, IL and Danielle Lyons of Atlanta, GA; his loving mother, Ellora Lyons of Peoria, IL; his siblings; Michael Lyons of San Francisco, CA, Don (Annie) Lyons of Goose Creek, SC, Curtis Lyons of Kansas City, MO, Charla (Rev. James) Fleming, Cheryll (Keith) Boswell and Ruthi Lyons all of Peoria, IL; 20 grandchildren; a host of great-grandchildren; and a host of nieces, nephews, other relatives, friends and his Mount Zion Baptist Church Family. He is preceded in death by his father and 4 grandchildren, Jeremiah Hayes, Deshaun Hayes, Jazmine “BJ” Ivy and Brandon Grant. A two-hour visitation will be held from 5 PM to 7 PM, Thursday, September 30, 2021 at his beloved Mount Zion Baptist Church. Funeral services will be held at 11 AM on Friday, October 1, 2021 at Mount. Zion M. B. Church with a two-hour visitation beginning at 9 AM. Pastor Lyons will be laid to rest at Lutheran Cemetery. Online condolences may be made at simonsmortuary.com. The service will be live streamed on Simons Mortuary's Website or Facebook page at https://www.facebook.com/Simons-Mortuary-232095303487150 promptly AT THE TIME OF THE SERVICE. Due to Covid-19 restrictions, social distancing is encouraged To be consistent with recommendations from the National Funeral Directors Association (NFDA), funeral home directors have been instructed and should follow CDC guidelines on gatherings, including those directly related to funerals, visitations, or graveside services. *In an effort to mitigate the spread of COVID-19, we ask that everyone in attendance: wear a face mask and refrain from hugging, kissing and shaking hands (as hard as it is to see someone you care about and not touch them). *It is our responsibility as a Funeral Directors, to do everything we can to advise families in order to honor our beloved Families and to keep everyone as safe as possible. Thanks in advance for your cooperation!

Send flowers to the Lyons family.