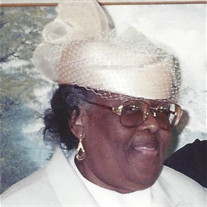 Mrs. Altha Williams, 87, of Peoria, Illinois; formerly of Forrest City, Arkansas, passed away at 4:50 am Thursday, June 14, 2018 at HEDDINGTON OAKS in West Peoria IL. Altha was born July 27, 1930 in Brinkley, Arkansas to the Rev. Jessie C. & Magnolia (Carter) Eckwood. She met Samuel Williams, Sr., in Palastine, Arkansas and were married on May 26, 1949. To that union six children were born; three girls and three boys. Her husband, Samuel, Sr., preceded her in death on March 29, 1975. Leaving to mourn her death are two sons, Samuel E. (Rosie) Williams, Jr., Jessie C. (Shirley) Williams of Peoria IL, two daughters Gloria D. (Walter) Williams of Peoria IL, & Loretha Williams of Atlanta, GA, 9 grandchildren, 7 great-grandchildren and a host of Nieces and nephews. She was preceded in death by her parents; REV. J.C. Eckwood & Mother Magnolia; two sisters, Pecola Eckwood of Kansas City KS and Jessie Mae Austin of Wabbasiki AK; one son Hymon Williams Sr.; and one daughter Koretta Williams. Altha started her work experience as a domestic house keeper, last working for Reltoc manufacturing, retiring in 1993 after 30 years of work. Altha accepted Christ at a very early age. She was a member of Bethel United Methodist Church where she was very active in the church and in Sunday school until failing health prevented her from physically attending. Altha was always a care giver and wanted so much to become a nurse. That dream never became a reality but she always did for others. Altha LOVED her kids and wanted more for them than she had for herself. She made sure all of them had the opportunity to go to college and be successful. Altha will be remembered as a wonderful and loving wife, mother, sister and friend. Funeral services will be held at 11 am on Saturday, June 23, 2018 at Bethel United Methodist Church, located at 210 N. Richard Pryor Place where Pastor Florene "Flo" Scott will officiate. Visitation will be at 10:00 am, one hour before the funeral. Memorial contributions may be made to the Peoria Alzheimer’s Organization. Simons Mortuary has been entrusted with arrangements. Online services may be made at simonsmortuary.com.

The family of Mrs. Altha Williams created this Life Tributes page to make it easy to share your memories.