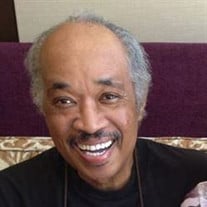 André M. Bohannon, 76, of Peoria peacefully passed away at 10:46 pm on Wednesday, December 13, 2017. He was born May 28, 1941, in South Bend, IN, to Frederick M. and Precious Mae (Hesiben) Bohannon. He graduated from Washington High School in 1959 and in 1963, received a Bachelor's degree in Education from Ball State University. He was well known in the community as a musically gifted student and later a community activist. He was well-respected as among the first African American high school teachers in South Bend Schools. André was active in the local teachers' union. While teaching English at Washington High School, he completed a Masters of Arts degree from the University of Notre Dame. In 1964, he married Irene Kimble, they had one daughter, Ché Andrea. The family moved to Montgomery, AL when André was sought after to become principal of a high school. Following that tenure, he moved to Peoria, IL and served at the Tri-County Urban League as Deputy Director. Being recognized for strong leadership skills, in 1974, André became an administrator for the City of Peoria and rose to the position of Assistant City Manager from which he retired in 1986. He then started his own management consulting firm, Urban Diversified Services, which specialized in the areas of human service development. In 1992, André was elected Peoria City Councilman to the First District. He became the host of CAPtions Broadcasting where he continued to broadcast this television program until he became ill. Having a passion for helping people, he was actively involved in numerous community and civic organizations to include Kappa Alpha Psi, Inc. Over his lifetime, he has received numerous awards and honors including being featured in the Peoria Riverfront Museum African American Wall of Fame and being named Man of the Year by the University of Notre Dame Alumni Association of Peoria. André leaves to cherish his memory, his daughter, Ché A. (David) Glover of Manassas, VA; son, William Bohannon of Atlanta, GA; 3 grandchildren, Gabrielle E. Glover of Manassas, VA; Brandon M. Glover of Manassas, VA; Brittany N. (Willie) Truitt of Snellville, GA.; and two great-grandchildren, Chase and Carsin Truitt. André was preceded in death by his parents, his sister Sharon Bohannon, and his wife Anne Bohannon. A memorial service will be held at 11 am on Saturday, April 14, 2018 at Ward Chapel A.M.E. Church. Host Pastor Adrian Johnson and Rev. Arthur Williams, Sr., will officiate. Simons Mortuary has been entrusted with arrangements. Online condolences may be made at SimonsMortuary.com.

André M. Bohannon, 76, of Peoria peacefully passed away at 10:46 pm on Wednesday, December 13, 2017. He was born May 28, 1941, in South Bend, IN, to Frederick M. and Precious Mae (Hesiben) Bohannon. He graduated from Washington High School in... View Obituary & Service Information

The family of Mr. Andre' Marcellus Bohannon created this Life Tributes page to make it easy to share your memories.

Send flowers to the Bohannon family.