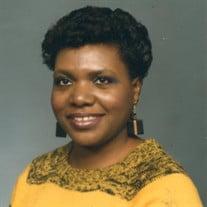 Ms. Annie Lee Ferguson, 67, of Peoria, IL transitioned to her heavenly home at 1:24 PM on Saturday, March 23, 2019 at Generations Nursing Home. Annie was born on August 29, 1951 in Augusta, Arkansas to John and Leola (Peten) Ferguson, Sr. She volunteered at Harrison Elementary School for many years. Annie loved solving word search puzzles, sudoku and writing food recipes. Annie leaves to cherish her memory two daughters, Natasha Yarbrough and Gilda Ferguson of Peoria, one grandson, whom she raised, Shanndon Ferguson of Peoria; eight brothers, Orville Nevels, Ronald Ferguson, James Ferguson, John Ferguson, III, Walter Ferguson, Michael (Robin) Ferguson all of Peoria, Grice Ferguson of Aurora, IL and Troy Ferguson of Peoria; three sisters; Ivory Ferguson, Judy (Larry) Vincent and Jo Wanda Ferguson all of Peoria; eight grandchildren and a host of nieces, nephews, other relatives and friends. She is preceded in death by her parents and one daughter, Shannon Ferguson. Funeral services will be held at 11 AM on Saturday, March 30, 2019 at Faith Tabernacle C.O.G.I.C. with a visitation one-hour prior beginning at 10 AM. Elder Felton Beck, Jr. will officiate. Annie will be laid to rest at Parkview Cemetery. In lieu of flowers donations may be made to the Shanndon Ferguson Education Fund at CEFCU or the local chapter of Susan B. Komen Foundation. Simons Mortuary has been entrusted with arrangements. Online condolences may be made at SimonsMortuary.com.

The family of Ms. Annie Lee Ferguson created this Life Tributes page to make it easy to share your memories.

Ms. Annie Lee Ferguson, 67, of Peoria, IL transitioned to her...