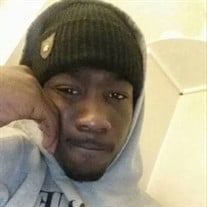 Mr. Anthony “AJ” Jerome Lee Polnitz, Sr., 22, of Peoria, IL passed away at 3:30 am on Sunday, April 8, 2018. “AJ” was born on January 11, 1996 in Chicago, IL to Evester Polnitz, Sr. and Alisha Dean. “AJ” loved to play basketball and was a former member of the Peoria Central High School basketball team. He was a people person; very respectful, loving and helpful to all. He was very positive with a big heart and a smile that would light up a room. “AJ” attended Living Word Christian Church in Forest Park, IL where Rev. Dr. Bill Winston is the Pastor. AJ was working for Dors In Home Care as a personal assistant in Chicago, IL. His client grew to love Anthony and thought very highly of him. “AJ” leaves to cherish his most precious memory his father, Evester (Jennifer) Polnitz, Sr. of Peoria; his mother, Alisha Dean of Chicago, IL; his aunt Michelle Polnitz and uncle Shawn Shockley who raised him of Peoria, IL; three brothers, Evester Polnitz, Jr., Rico Bookerand Jeremy Booker; five sisters, Alexis Polnitz, Jada Polnitz, Mya Ziegler all of Peoria, Isis Washington of Florida and Jessica (Darrion) Sheppard of Peoria; cousins he was raised with, James Campbell, Keisha Polnitz and Kanisha Polnitz all of Peoria; his grandparents, Sandra Dean and Jerry Pierce both of Chicago, IL; his uncles, Jerry Dean of Chicago, IL, Jerome Polnitz, Tyrome, Polnitz and John Polnitz all of Peoria; one aunt, Veronica Dean of Chicago, IL; a special nephew, E’marion Polnitz of Peoria; Tiarra Jones expecting mother of his child and a host of other family and friends who loved him. He is preceded in death by his grandmother, Catherine Polnitz, one son, Anthony Polnitz, Jr. and his uncle, Michael Polnitz. Funeral services will be held at 11am on Friday, April 20, 2018 at Victory Christian Church with visitation beginning at 10am. Pastor Chuck Brown will officiate. Simons Mortuary has been entrusted with arrangements. Online condolences may be made at SimonsMortuary.com.

The family of Mr. Anthony "AJ" Jerome Lee Polnitz Sr. created this Life Tributes page to make it easy to share your memories.

Send flowers to the Polnitz family.