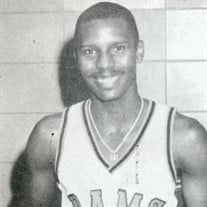 Anthony V. Gulley, Sr., 53, of Peoria, IL passed away suddenly at 9:45 pm on Tuesday, May 9, 2017 at Unity Point Proctor Health Center. Anthony was born on December 12, 1963 in Peoria, IL to Paul D. and Learlena (Vance) Gulley. “Big Tony” as he was affectionately known, was a 1983 graduate of Manual High School where he was an amazing well known shooting guard and star basketball player. He was a Sun Times, UPI, IBCA, Chicago Tribune All-State and McDonald’s All American. Under the leadership of Coach Dick Van Scyoc, Anthony set scoring records and contributed to the beginning of what we know as Manual’s Basketball Dynasty. He attended Casper College in Casper, Wyoming where he was also a first team All American and Illinois Southern University at Edwardsville, IL. Anthony married his High School sweetheart, Maria Hayes, on April 6, 1990 in Peoria. Anthony worked as a forklift operator for many years while also working at the family business, Gulley’s Barbecue. Anthony was loving, kind hearted and a funny person. He enjoyed listening to music, basketball, football, swimming, billiards, cars and barbecuing. He loved spending time with his family and friends. Anthony you will truly be missed! Anthony leaves to cherish his most precious memories his loving wife of 27 years, Maria Gulley; three children, Anthony “Lil Tony” Gulley, Jr., Paris Gulley and L’Trice Gulley all of Peoria; a god-son, Marcus (Brooke) Jackson of New Berlin, WI; two brothers, Willie Williams of St. Louis, MO and Calvin Buffington of Chicagoland; one sister, Barbara A. Williams of St. Louis, MO; his best friend through grade school to college, Alphonso Alexander, Jr., of Peoria; 10 grandchildren; and a host of nieces, nephews, aunts, uncles, other relatives and friends. He is preceded in death by his parents; one son, Bryson Kelly; two brothers, Clarence Williams and Alfred Williams. Funeral services will be held at 1 pm, Saturday, May 20, 2017 at Mt. Olive M.B. Church with a visitation beginning at 12 noon. Pastor Chuck Brown will officiate. Anthony will be laid to rest at Swan Lake Memory Gardens. Simons Mortuary has been entrusted with arrangements. Online condolences may be made at simonsmortuary.com.

The family of Mr. Anthony "Big Tony" Vincent Gulley Sr. created this Life Tributes page to make it easy to share your memories.

Send flowers to the Gulley family.