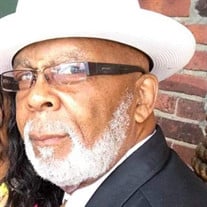 Mr. Azie “Ace” Lonzell Gaten, 72, of Peoria, IL, passed away peacefully at 8:27 a.m. on Monday, November 11, 2019 at UnityPoint Health Methodist surrounded by his family. Azie was born on December 25, 1946, in Mounds, IL to Bennie and Elsie (Marks) Gaten. He is a 1964 graduate of Crane High School in Chicago, IL where he played football. It was also where he met his future wife, Ada (Connor). They were married August 1, 1969. Azie served our country during the Vietnam War. He was honorably discharged from the United States Army in 1996 after having received multiple commendations, including a Bronze Star. He retired as a member of the Army Reserves in 2004. Azie was a professional truck driver, his attention to safety and his road courtesy awarded him membership in Preston Trucking Company’s Million Mile Club. He was retired from the Peace Brothers Motorcycle Club and was a member of the American Legion Post 1151 where he was former Post Commander. He accepted Jesus Christ as his Lord and Savior at a young age and served as former President of the Usher Board and Sunday School Teacher at Rising Sun Christian Church. Azie enjoyed watching the Chicago Bears, playing chess, and spending time with his family and friends. We will always remember his infectious laugh and his gift for storytelling. Azie leaves to cherish his memory: his wife, Ada Gaten of Peoria; one son, Clarence (Monica) Gaten of Allentown, PA; five daughters, Charisse “Sherry” Cowan of Forest Park, IL, Jamie Felton of Carlisle, PA, Janine Gaten and Paulette (Marcus) Fair both of Peoria and Audrey (Claude) Suttle of Coconut Creek, FL; one brother, Leroy Gaten of Jacksonville, FL; special cousins with whom he grew up, Ora “Dimple” Branum, Ted Younger, Sam Marks, Michael Marks, Lawrence Marks, John Henry Lewis, John “Johnny” Pullen, and Henry “Bubba” Walker, Jr.;14 grandchildren, 8 great grandchildren and a host of nieces, nephews, cousins, other relatives, and friends. He was preceded in death by his parents. Funeral services will be held at 10 a.m. on Saturday, November 16, 2019 at Rising Sun Christian Church with a visitation beginning at 9 a.m. Pastor John Gibson will officiate. Azie will be laid to rest at Swan Lake Memory Gardens, where U.S. Military Honors will be rendered. Simons Mortuary is entrusted with arrangements. Online condolences may be made at SimonsMortuary.com.

The family of Mr. Azie "Ace" Gaten created this Life Tributes page to make it easy to share your memories.

Send flowers to the Gaten family.