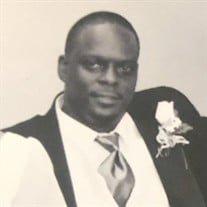 Mr. Bernell Edward Harvey, Sr., 55, of Peoria, IL, transitioned at 3:24 am on Tuesday, January 11, 2022 at OSF St. Francis Medical Center, Peoria, IL. Bernell was born on December 2, 1966 in Peoria, IL to Richard, Sr. and Mildred (Snow) Harvey. He married Michelle Watson on June 26, 2004. Bernell worked at Sharon Healthcare as a Head Chef. He earned his certification in Culinary Arts and Carpentry at Job Corp. Bernell was a very compassionate, humble and talented person. He loved to cook. Bernell was a die-hard Chicago Bears fan. He loved his wife, children and grandchildren. Bernell leaves to cherish his precious memories, his wife, Michelle Harvey of Peoria, IL; eight sons, Bernell (Rochelle) Harvey, Jr., Jonathan Rayford, Michael Rayford, Shawn Rayford, Kevin Rayford, Lorenzo Rayford and James Holman all of Peoria, IL and Brandon Watson of Olathe, KS; three daughters, Makaila Watson of Edwardsville, IL, Mikheala Harvey and Mya Womack of Peoria, IL; six brothers, Richard Harvey, Jr., Stephen Harvey, Lenill Thornton all of Peoria, IL, William Thornton of Minneapolis, MN, David Thornton of Savannah, GA and James Thornton of Alton, IL; three sisters, Regina Harvey-Perkins of Bolingbrook, IL, Sherry Harvey of Houston, TX and Juanita (Robert “Bobby”) Williams of Peoria, IL; six grandchildren, Laryn, Jordyn, Peyton, Raqueal, Jawon and Kai-lan and a host of nieces, nephews, other relatives and friends. He is preceded in death by his parents, grandparents, Eddie Snow, Clara Hickman, Nora Naves and Charlie Harvey, two brothers, Joe Thornton and Pastor Steven Thornton, one sister, Phyllis Harvey, special aunt, Ruby Peary. Funeral services will be held at 12 pm on Saturday, January 22, 2022 at Sovereign Grace M.B. Church with a visitation prior beginning at 11 am. Pastor Alvin Riley, Sr. will officiate. Simons Mortuary has been entrusted with arrangements. Online condolences may be made at SimonsMortuary.com. The service will be live streamed on Simons Mortuary's Website or Facebook page at https://www.facebook.com/Simons-Mortuary-232095303487150 promptly AT THE TIME OF THE SERVICE. Due to Covid-19 restrictions, social distancing is encouraged to be consistent with recommendations from the National Funeral Directors Association (NFDA), funeral home directors have been instructed and should follow CDC guidelines on gatherings, including those directly related to funerals, visitations, or graveside services. *In an effort to mitigate the spread of COVID-19, we ask that everyone in attendance: wear a face mask and refrain from hugging, kissing and shaking hands (as hard as it is to see someone you care about and not touch them). *It is our responsibility as a Funeral Directors, to do everything we can to advise families in order to honor our beloved Families and to keep everyone as safe as possible. Thanks in advance for your cooperation!

Send flowers to the Harvey family.