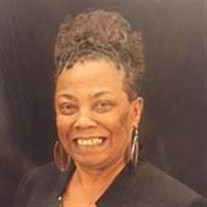 Ms. Bobbie Jean “MeMaw” Brown, 72, of Peoria, IL passed away at 4:45 am on Wednesday, July 26, 2017 at Heddington Oaks Nursing Home in West Peoria, IL. Bobbie was born December 29, 1944 in Gilmore, Arkansas to Lonnie and Maggie (Boston) Brown. Bobbie and her family moved to Peoria in April of 1961. She accepted Christ at an early age and joined Pleasant Grove Baptist Church under the leadership of the late Pastor George Lobdell. Bobbie was a faithful member and sang in the Gospel Choir at Pleasant Grove until her health failed. Bobbie had a great work ethic. She worked for Lee’s Hotel and the Wallace Company at The Hurlburt and Sherman Houses for many years. Bobbie loved evangelism, singing, cooking and spending time with her family. Bobbie leaves to cherish her most precious memories three daughters, Dorothy “Duck” (Larry) Woods of Snellville, GA, Shirley “Redd” Washington and Schanda Brown both of Peoria; one brother, Johnnie Brown of Stockton, CA; 8 grandchildren, including Shardae Grayer whom she raised; a host of great grandchildren; one great-great granddaughter; and a host of cousins including a special cousin who was her best friend, Arlene Swanson; three sister-in-laws, Bessie Brown, Earnestine Ingram both of Peoria and Phyllis Brown of Logan Point, IN. She is preceded in death by her parents; 7 brothers, James, Richard, Calvin, Lorenzo, Lonzo, Jackie and Willie Brown and 7 sisters, Marie Brown Hogan, Ruthie Lee Brown, Hattie Lee Brown, Janie Mae Chew, Earnestine Henderson, Hattie Mae Brown and Irene Brown. A funeral service will be held at 11 am on Saturday, August 5, 2017 at Prince of Peace M. B. Church, 711 E. Arcadia, Peoria, IL. A visitation will be held one hour prior to the service at 10 am. Host Pastor Simons J. Holly, Jr. and the eulogist is Rev. Alvin Riley, Sr., of Sovereign Grace M. B. Church will officiate. Bobbie will be entombed at Parkview Mausoleum. Simons Mortuary has been entrusted with arrangements. Online condolences may be made at SimonsMortuary.com.

The family of Ms. Bobbie "MeMaw" J. Brown created this Life Tributes page to make it easy to share your memories.

Send flowers to the Brown family.