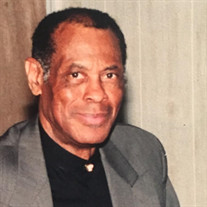 God called his faithful servant, Mr. Booker T. Davis, 85, of Creve Coeur, Illinois from labor to reward at 4:15 PM on Thursday, December 19, 2019 at his home surrounded by his family. Booker T. Davis was born February 14, 1934 in Greenville, Mississippi to the late Nellie Jones and Bill Davis. Booker was raised by a “village” which included his maternal grandmother, Mary Ashew. He received Jesus Christ as his Personal Savior at an early age while attending church with his grandmother. Booker was educated in the Peoria public school system and graduated from Manual High School. After graduation, Booker joined the United States Army and was stationed at Fort Campbell, Kentucky. Booker was a good provider and conscientious worker. He was employed as a machinist at Caterpillar for over 30 years until his retirement. On December 7, 1958, Booker married Sophia L. Thomas at Ward Chapel A.M.E. Booker demonstrated what it meant to be a devoted husband. They were happily married for 45 years until Sophia passed in 2004. They enjoyed traveling throughout the United States and abroad to Paris. Booker had a zeal for life. He enjoyed fishing, roller skating, bowling and watching baseball. On June 4, 2017, Booker received an award in appreciation of representing Ward Chapel A.M.E. Church and Ushers for nearly thirty years of bowling in the United Usher Board Bowl-a-thon. Booker was an avid Chicago Cubs fan and he was thrilled when they won the World Series. One of Booker’s prized treasures was his family. He loved his family to no end and would do anything for them. If anyone needed him, he was always there without hesitation. Booker extended kindness, generosity, counseling, guidance and assistance. Booker had an eye for fashion, and you could always count on him to coordinate from head to toe. Booker was a faithful servant of Ward Chapel A.M.E. for over 60 years. He was a member of the Men’s Choir and a Trustee. On June 29, 2014, Booker received a Certificate of Appreciation for his many years of service as a trustee. Booker loved to read the Bible daily and had many favorite scriptures he would highlight. Booker joined his family who preceded him including: his wife, Sophia L. Davis; two sons, Rickey L. Davis and Paul F. Davis; and grandson, Brandon T. Jackson. Booker leaves to cherish his memory and carry on his legacy: daughters Kathy A. Davis and Cynthia P. Davis; grandchildren Chanel L. Davis, Katie M. Richardson, Noelle K. Davis (mother, Denise) and Simone E. Davis (mother, LaTrice); seven great-grandchildren; dedicated companion Essie Thomas who helped take care of Booker before her move to Texas; and a host of family and friends. Funeral services will be held at 10 AM, Saturday, December 28, 2019 at Ward Chapel A.M.E. Church with a visitation beginning at 9 AM. Pastor Adrian L. Johnson will officiate. Booker will be laid to rest at Swan Lake Memory Gardens with full Military Honors. Simons Mortuary has been entrusted with arrangements. Online condolences may be made at simonsmortuary.com.

The family of Mr. Booker T. Davis created this Life Tributes page to make it easy to share your memories.

Send flowers to the Davis family.