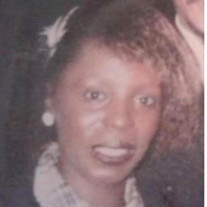 Mrs. Brendene Nelson White, 63, of Peoria, IL passed at her residence on Friday, December 1, 2017 at 9:18 am surrounded by her family. Brendene was born on September 28, 1954 in Peoria, IL to Felix G. Lobdell and Lucille (Clabourn) Ross. She graduated from Manual High School in 1973. She married Ronald Nelson; he preceded her in death. Brendene continued her education at Midstate College. She worked as a Certified Nurses Aid for many years. Brendene was the matriarch of her family. What she said impacted the whole family. Her life was filled with love and laughter! She was a happy and loving person. She loved her husband, children and grandchildren. She also loved cooking and decorating her nails! Brendene leaves to cherish her most precious memories her loving and devoted husband, Christopher White of Peoria; two sons, Drake (Heaven) Stewart of Atlanta, GA and Eric Kenon of Peoria; two daughters, Shaeleta (Robert McKay) Nelson and Yolanda (Demetrius Marks) Robinson both of Peoria; step children, Chrishana White and Jamari Paul both of Peoria; six sisters, Judy Ross, Carolyn Ross, Sheila Ross, Brenda Ross, Gilda Ross Johnson and Patricia Wright all of Peoria; 19 grandchildren and a host of great grandchildren. She is also preceded in death by her parents; two brothers, Cecil Jenkins and William Jenkins and one sister, Jetaun Ross. Funeral services will be held at 11 am on Saturday, December 16, 2017 at Mt. Zion Baptist Church with a visitation beginning at 10 am. Pastor Alphonso Lyons, Jr., will officiate. Simons Mortuary has been entrusted with arrangements. Online condolences may be made at simonsmortuary.com

Mrs. Brendene Nelson White, 63, of Peoria, IL passed at her residence on Friday, December 1, 2017 at 9:18 am surrounded by her family. Brendene was born on September 28, 1954 in Peoria, IL to Felix G. Lobdell and Lucille (Clabourn) Ross. She... View Obituary & Service Information

The family of Mrs. Brendene (Nelson) White created this Life Tributes page to make it easy to share your memories.

Send flowers to the White family.