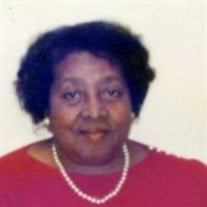 Mrs. Canary Louise Burrell, 95, of Peoria, IL passed away peacefully at 12:49 pm on Monday, October 2, 2017 at OSF Richard Owens Hospice Home. Canary was born on August 7, 1922 in Peoria, IL to Lucy (Scott) and Artrie Perry Jones, Sr. She was a graduate of Manual High School. She married Hilbert Henry Burrell on October 26, 1942 and to their union two children were born, Sharon and Michael. Hilbert preceded his wife in death on January 4, 2017 after over 75 years of holy matrimony. Canary had a strong work ethic inside and outside her home. She formerly worked in housekeeping at Commercial Bank and in the cafeteria at Proctor Hospital. She later retired from Caterpillar, Inc., in housekeeping after over 18 years of service. Canary loved spending time with her family and friends. She loved shopping via catalog. Canary leaves to cherish her most precious memories her loving and devoted children, Sharon Burrell of Peoria and Elder Michael (Missionary Glenda) Burrell, Sr., of Peoria; a host of grand, great grand and great-great grandchildren; and a host of nieces, nephews, other relatives and friends. She is preceded in death by five sisters, Preston Davis, Susie Wright, Edith Nundley, Dorothy Zimmerman and Marilyn Hightower and one brother, Artrie Perry Jones, Jr. Canary was a faithful member of Bethel United Methodist Church for over 70 years where she was a member of the Chancel choir, Pastoral Parish and Sunday school teacher. She and her sisters, Edith Nundley and Susie Wright often volunteered for the church’s Breakfast Program. Canary was also an active member of the Order of Eastern Star Chapter 74 until her health declined. Funeral services will be held at 11 am on Monday, October 9, 2017 at Bethel United Methodist Church with a visitation beginning at 10 am. Pastor Florene Scott will officiate. Canary will be laid to rest at Swan Lake Memory Gardens. Simons Mortuary has been entrusted with arrangements. Online condolences may be made at simonsmortuary.com.

The family of Mrs. Canary Louise Burrell created this Life Tributes page to make it easy to share your memories.

Send flowers to the Burrell family.