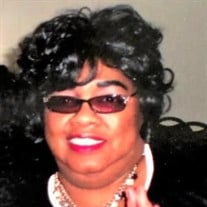 Mrs. Charlene Wyatt, 74, of Peoria, IL passed away at 12:32 pm on Tuesday, January 26, 2021 at UnityPoint Health Methodist Hospital. Charlene was born on April 15, 1946 in York, AL to Zebbie, Sr. and Thelma (McFadden) Smith. She married William Wyatt in York, AL in 2005. He preceded her in death. Charlene was a homemaker, kind hearted and a generous person. She liked to watch black and white TV Western programs and was a great cook. Sister Charlene was a faithful and dedicated member of City on A Hill Church in Peoria, IL, under the leadership of Pastor William Preston. She served at her church until her health failed. Charlene leaves to cherish her precious memories her sisters, Geraldine (Robert) Yates, Helen (George) Evans and Dorothy (Roosevelt) Lee all of York, AL, her caregivers, Pastor William Preston and his wife, Helen of Peoria, IL; and a host of many children she took under her wings and watched over, nieces, nephews, family and friends. She is also preceded in death by her parents and her brother, Zebbie Smith, Jr. No services will be rendered in Peoria but there will be a memorial service held at a later date in York, AL. Simons Mortuary has been entrusted with arrangements. Online condolences may be made at SimonsMortuary.com.

The family of Mrs. Charlene Wyatt created this Life Tributes page to make it easy to share your memories.

Send flowers to the Wyatt family.