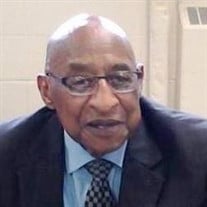 Mr. Charles Henry. Cannon, Sr., 82, of Peoria, IL, transitioned to his heavenly home on Wednesday, May 2, 2018, at OSF Medical Center. Charles was born August 31, 1935 to Samuel H. and Excenia Woods Cannon in Philadelphia, TN. Charles served his country and was honorably discharged from the US Army. Charles married Vickie Purham on May 16, 1998, in Peoria, IL. To their union two children were born, Andrea and Charles Jr. For 31 years, Charles served as a police officer, detective & Sgt. for the City of Peoria. Shortly after retiring from the Police Department he worked for Peoria Charter Coach providing transportation, often at the request of individuals for their special events. Charles most recently served as a bailiff for the Peoria County Courts, until September 2017. Surviving Charles are his loving wife Vickie; and cherished children, Andrea (Malcolm) Grant of AZ, Charles (Claire Blankenship) Cannon Jr. of Peoria, William Cannon of Peoria, Kenneth (Malinda) Cannon of Dunlap, IL, Alicia (Edward) Williams, Anita (Michael) Ingram, Ramona (Joseph) Harmon and their mother Mamie Espy, all of OH, and Scott (Angela) Howard of Peoria. Also surviving Charles are his loving sisters Maynell (William) Adams of AZ and Freda Barnes of CA, and stepchildren Amy, Todd, Arrian and Tristan Purham. Survivors also include Charles’ special cousin William Sharp of TX, 26 grandchildren, 28 great grandchildren and a host of nieces, nephews and friends. Charles was preceded in death by his parents; his brothers Samuel, Willie, Maynard and Lonnie “Don” Cannon, and Dobie Williams; his sister Mary Jordan and his daughter Elizabeth Morrow. Vickie and the family would like to give special thanks to Jeff Purham, Dr. Gerald McShane and the Forest Park 3rd floor staff at OSF Medical Center for their friendship and care. Funeral services will be held at 11 am on Friday, May 11, 2018 at St. Paul Baptist Church with a visitation beginning at 10 am. Pastor Deveraux Hubbard will officiate. Charles will be laid to rest at Lutheran Cemetery with honors by the US Army, Peoria Police Department and the Peoria Sheriff’s Office. Simons Mortuary has been entrusted with arrangements. Online condolences may be made at SimonsMortuary.com.

The family of Mr. Charles Henry Cannon Sr. created this Life Tributes page to make it easy to share your memories.

Send flowers to the Cannon family.