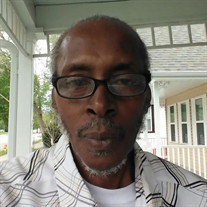 Mr. Charles “Chizzy” E. Linwood, 70, of Peoria, IL passed away at 8:55 AM on Monday, September 16, 2019 at UnityPoint Health Methodist Hospital. Charles was born on March 5, 1949 in Peoria, IL to Robert, Jr. and Elease (Lobdell) Linwood. Charles was a graduate of Spalding High School where he played in the band and orchestra. Charles served in the US Air Force during the Vietnam era. He played in the several bands including, Ace of Spades, Soul Survivors, P-Town Connection, and Second Time Around. Charles traveled and performed with the group Up with People. He was a recording Artist. He played piano and the keyboard at Zion Baptist Church and Mt. Zion Baptist Church. Charles was a long-time member of Mt. Zion Baptist Church where he was also was the choir director. Charles leaves to cherish his loving memory five brothers, Dewayne (Phyllis) Linwood, Robert (Aaron) Linwood, Terry Linwood all of Peoria, IL, David Linwood and Derrick Linwood both of Pontiac, MI; seven sisters, Barbara Linwood of Nashville, TN, Gwendolyn (Ted) Spinks, Elana Linwood, Renee Linwood, Chawana Linwood, Lerra Linwood all of Peoria IL and Carla Linwood of Pontiac, MI; his cat, Girly Girl and a host of nieces, nephews, other relatives and friends. He is preceded in death by his parents, one sister, Vetta Linwood and two brothers, Stevie and Larry Linwood. Funeral services will be held at 10 AM, Saturday, September 28, 2019 at Mt Zion Baptist Church with a visitation at 9 AM. Pastor Alphonso Lyons, Jr. will officiate. Charles will be laid to rest at Camp Butler National Cemetery. Military Rites will be accorded. Simons Mortuary has been entrusted with arrangements. Online condolences may be made at SimonsMortuary.com.

The family of Mr. Charles "Chizzy E. Linwood created this Life Tributes page to make it easy to share your memories.

Send flowers to the Linwood family.