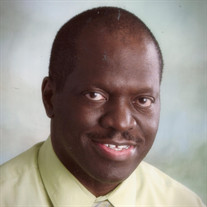 Charles Edward Warr Sr., 62, of Peoria, IL, departed this life peacefully surrounded by his family and friends on Friday, September 27, 2019 at 6:03 p.m at UnityPoint Health Methodist. Charles was born in Peoria, IL on January 25,1957, to Verner Sr. and Theophus (Robinson) Warr. He attended Peoria Public Schools and graduated from Woodruff High in 1975. He enrolled into Eureka College and graduated with a B.S. degree in Elementary Education in 1979. Charles taught at Peoria Head Start before taking a teaching position with PPS150 at Franklin Elementary School in 1985. He was the only male teacher at Franklin throughout his 12 years there, and the female teachers enjoyed working with Charles. He received his M.A. degree in Educational Administration from Bradley University. Charles became an Assistant Principal in 1997, and he retired in that position in 2011. Charles married Carla Walton on July 23, 1983 in Peoria. To this holy matrimony was born one son, Charles Edward Warr II. They also have a niece, Andrea Walton, who is very special to them. Charles was a member of Star of Hope Full Gospel Church for over 30 years. He served on the Trustee Board and the Scholarship Committee. Mr. Warr was a dedicated teacher, and he stressed the importance of a good education to his students. Over the years he “adopted” at least 10 students and he made a difference in the lives of many others. Every Christmas, Charles would purchase personalized gifts for every student in his classroom. Charles also blessed everyone in his and Carla’s family with a well-liked or a much-needed gift. They unselfishly did this in lieu of gifting each other. After little Charlie became big enough, he went with his dad on each delivery so that he could learn the importance of giving. But, Charles not only gave at Christmas. Every summer he planned the “Back to School” cook-out for all of his nieces and nephews. He supplied them with the back-pack of their choice filled with enough school supplies to last them for half of the school year. Charles was a quiet and soft-spoken person; however, when he did speak, it was usually worthwhile to listen. He was fond of basketball and football, but a die-hard fan of the Chicago Bears! Occasionally, Charles could even be funny, like, when Carla would make him a healthy plate, and when she wasn’t looking, he would talk his two nieces, Angel and Chaquawana, into sneaking him a slice of Demetra’s caramel cake and a dish of Lynn’s peach cobbler. Most of all, Charles was a genuine family man. He spent quality time with his wife, son, grandchildren, nieces and nephews, and siblings. He attended the family get-togethers when he could. Charles Warr Sr. was a good son, a good brother, a good student, a good husband, a good father, a good grandfather, a good teacher, a good Assistant Principal, and the list could go on and on and on. Charles leaves to cherish his precious memories his wife, Carla, of over 36 years, of Peoria, IL; one son, Charles Edward Warr II, of Peoria, IL; two grandchildren, Jaida N. Alexander-Warr and Charles Edward Warr III, of Peoria, IL; 10 godchildren; six sisters, Minnie (and Robert) Smith, of Germantown Hills, IL, Carol M. Warr of Rosenberg, TX, Ray V. Reddick of Peoria, IL, Mary Lynn (and Isaac) Yelder of Pooler, GA, Celia (and Calvin) Hightower, and Demetra Bolden, both of Peoria, IL; three brothers, Dennis M. Sr. (and Felicia) Warr, and Alonzo Craig (and Gale) Warr, both of Peoria, IL, and Dexter Warr of Chicago, IL; a niece, Andrea Walton, and an adopted sister, Roberta Jackson, both of Peoria, IL; and a host of nieces, nephews, cousins, other relatives, and friends. Charles was preceded in death by his parents, Verner Sr. & Theophus Warr; 2 sisters, Phyllis Young, and Sophia Warr Birris; and one brother, Verner Warr Jr. Charles, you will not be forgotten. Funeral services will be held at 10 AM, Saturday, October 5, 2019 at Star of Hope Full Gospel Church with a visitation at 9 AM. Bishop Joseph Johnson, Pastor will officiate. Charles will be laid to rest at Lutheran Cemetery. Simons Mortuary has been entrusted with arrangements. Online condolences may be made at SimonsMortuary.com.

The family of Mr. Charles Edward Warr Sr. created this Life Tributes page to make it easy to share your memories.

Send flowers to the Warr family.