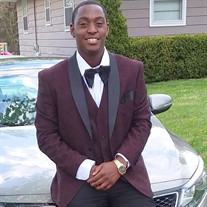 Mr. Charles Paul Woods, III, 18, of Peoria, IL passed away at 7:21 PM on Thursday, March 28, 2019 at OSF St. Francis Medical Center, Peoria, IL. Charles was born in Peoria, IL on June 7, 2000 to Towanda White and Charles Woods, II. Charles was a graduate of Peoria Central High School. He was on the football team that won the 2017 State Championship. Charles was smart and business minded. He was passionate about his education and was an encouragement to his friends. He was currently a student at Illinois Central College, East Peoria, where he was successfully pursuing a degree in Business Administration with honors. He was a loving mentor and big brother to many of his family and peers. Charles was wise beyond his years. He worked and saved his money to buy his dream car, an “Audi A6”. Charles leaves to cherish his most precious memory his parents, Towanda White of Peoria, Charles Woods, II of Chicago and step father, Jean Genard, Sr., of Peoria; grandparents, Earl Wallace of Peoria, Charles (Sharon) Woods and Denise Woods all of Chicago; a great grandfather, Rosevelt Morgan of Chicago; two sisters, Jennea Genard and Cennea Genard both of Peoria; many aunts, uncles and a host of cousins, other relatives and friends. He is preceded in death by his grandmother, Myrtis White and great grandparents Eria White, Sadie Morgan, Bessie Currie and Clarence Woods. Funeral services will be held at 11 AM on Friday, April 12, 2019 at Star of Hope Baptist Church with a visitation one-hour prior beginning at 10 AM. Bishop Joe Johnson will officiate. Charles will be laid to rest at Swan Lake Memory Gardens. Simons Mortuary has been entrusted with arrangements. Online condolences may be made at SimonsMortuary.com.

The family of Mr. Charles Paul Woods III created this Life Tributes page to make it easy to share your memories.

Send flowers to the Woods family.