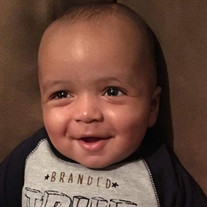 D’Maurionn Deshaun Simmons, 6 months old infant son of Precious M. Harris and Derrimus D. Simmons, passed away at 2:30 am on Sunday, July 23, 2017. Little D’Maurionn was born on January 20, 2017 in Phoenix, Arizona. He had a beautiful smile that could light up a room. His smile was so bright that if you were feeling down, she would cheer you up. Little D’Maurionn is survived by his mother, Precious Harris of Phoenix, AZ and his father, Derrimus Simmons of Peoria; siblings, Demetrius Townsend, Isayah Townsend, Corey Parker, Tayler Townsend and Serenity Parker all of Phoenix, AZ; his grandparents, Tongia Simmons Blackman, Aimee & Lester King and Timothy Pettigrew; his great grandparents, Harry & Kenna Luke and Mattie Sowell; special cousins, Domanisha Kinds, Brian Parker and Esiah Parker and a host of aunts, uncles and cousins. He is preceded in death by his uncle, Steven Owens; cousin, JaMaurionna Stringer and great grandparents, Eddie Charles Reeise, Henderson Sowell and Patricia Pettigrew. Funeral services will be held at 11 am on Saturday, July 29, 2017 at Sovereign Grace M. B. Church with a visitation beginning at 10 am. Senior Pastor of St. Paul Baptist Church, Deveraux Hubbard, will officiate. Simons Mortuary has been entrusted with arrangements. Online condolences may be made at SimonsMortuary.com.

The family of Infant D'Maurionn Deshaun Simmons created this Life Tributes page to make it easy to share your memories.

Send flowers to the Simmons family.