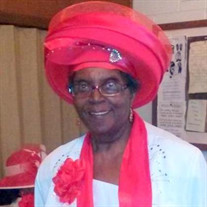 Mrs. Daisy Lee Johnson, 79, of Peoria, IL transitioned peacefully to her heavenly home at 10:52 am on Saturday, February 10, 2018 at UnityPoint Health Methodist. Daisy was born on April 18, 1938 in Helm, MS to Rev. Jordan and Rosie (Davis) Kimbrough. She married George Johnson on September 16, 1976 in Peoria, IL. They were married for 41 years. Daisy was a homemaker and a foster caretaker. She didn’t meet a stranger. Daisy loved to talk on the phone and play games on her tablet. Most of all she loved her family. Daisy confessed to Christ at an early age in Rising Sun Missionary Baptist Church in Scotts, MS. She was a member of St Luke M.B. Church since 1994 until the present. Daisy was president of the Mother’s Board, past president of the church choir, member of the Kitchen Committee, and Chairperson of the Bereavement Committee for 15 years. Daisy leaves to cherish her most precious memories her husband, George Johnson; five sons, John (Emma) Brown, Marvin Brown, Lonnie Kimbrough, Edward Kimbrough and James Kimbrough all of Peoria; three daughters, Courtney Smith, Teania Johnson all of Peoria; Earline (David) Jones of Lexington, KY; three brothers, Willie Kimbrough of Peoria, Robert Kimbrough of Cleveland, MS and John Kimbrough of Shaw, MS; three sisters, Creola Faulkner of Inglewood, CA, and Addie B. Kimbrough of Shaw, MS, Gloria Ray of Peoria; one special sister, Kathryn Dyes; 36 grandchildren; 28 great grandchildren and a host of nieces, nephews, and other family and friends who loved her. She is also preceded in death by two daughters, Joyce Kimbrough and Doris Kimbrough; five brothers, four sister, four grandchildren and two great grandchildren. Funeral services will be held at 11 am on Saturday, February 17, 2018 at New Cornerstone Baptist Church, with a visitation at 10 am. Host Pastor, Dr. Mark A. McConnell. Interim Pastor, Rev. Arthur Dyes of St. Luke Missionary Baptist Church will officiate. Daisy will be laid to rest at Lutheran Cemetery. Simons Mortuary has been entrusted with arrangements. Online condolences may be made at SimonsMortuary.com.

Mrs. Daisy Lee Johnson, 79, of Peoria, IL transitioned peacefully to her heavenly home at 10:52 am on Saturday, February 10, 2018 at UnityPoint Health Methodist. Daisy was born on April 18, 1938 in Helm, MS to Rev. Jordan and Rosie (Davis)... View Obituary & Service Information

The family of Mrs. Daisy Lee Johnson created this Life Tributes page to make it easy to share your memories.