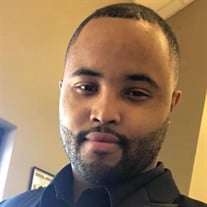 Damian Maurice Witherspoon, 26, of Peoria, IL passed Wednesday, April 29, 2020. Damian was born January 6, 1994 and was blessed with three mothers, Jamiko Witherspoon and Deroita Welch both of Peoria and Jedediah (Donte’) Cantrell of Belvidere, IL. Damian grew up on Proctor Street with his closest friends, the “Proctor Street Boys”. He married his high school sweetheart, Tina Washington on April 14, 2012 in Peoria. Damian accepted Christ at an early age at Grace Baptist Church where he was raised and played the drums at most church services. He continued playing the drums for the Lord as a member of Morning Glory Community Church and other churches around the Peoria community. Damian’s early education began at Christ Lutheran and Loucks Edison. He was a 2012 graduate of Manual High School where he played football and basketball. He was also a member of the wrestling team, ran track and played the drums in the band. He matriculated to Robert Morris University where he majored in Business Management and played football. He most recently was a Police Recruit for the Peoria Police Department. Damian had an infectious smile and had a great love for people. Damian leaves to cherish his most precious memories his wife of eight years, Tina Witherspoon of Peoria, IL; his sons, Landon and Adrian Witherspoon of Peoria, IL; five brothers, Dante Crowe, Malik Berger and William “Trae” Welch all of Peoria, IL, Anthony “TJ” Keeton, Jr., of Clovis, NM and Kimoni Cantrell of Belvidere, IL; four sisters, Arianna Berger and Sasha (Markarol) Welch-Moore both of Peoria, IL, Deja Dixon of Morton, IL and Saniya Cantrell of Belvidere, IL; his grandparents, Juanita (Tony) Foster and James (Maggie) Witherspoon all of Peoria, IL; his great aunt, Melissa Porch of Peoria, IL; his great grandparents, David and Bertha Henderson of Peoria, IL; his in-laws, Jimmie Washington and Tammy Lepretre both of Peoria, IL; and a host of other family and friends. He is preceded in death by his father, William Welch, Jr. A Private Funeral service will be held on Wednesday, May 6. 2020 at 12 noon at Simons Mortuary. Pastor Marlon Young, Sr., of Morning Glory Community Church will bring words of comfort to the family. The private funeral service will be streamed on Facebook Live @ SimonsMortuary.com. Contributions to the Damian Witherspoon Scholarship Memorial Fund for his two sons can be made directly to: Members Choice Credit Union IL Division of Cooperative Choice Network Credit Union 3919 N. University Peoria, IL 61614 (309)672-5230 Simons Mortuary has been entrusted with arrangements. Online condolences may be made at SimonsMortuary.com.

The family of Mr. Damian Maurice Witherspoon created this Life Tributes page to make it easy to share your memories.

Send flowers to the Witherspoon family.