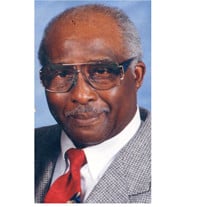 Mr. Daniel Ferguson, 91, of Peoria, IL transitioned at 11:40 am on Wednesday, October 31, 2018 at Aperion Care Peoria, Peoria Heights, IL. Daniel was born on August 13, 1927 in Little Rock, AR to John and Sarah (McBride) Ferguson. Daniel formerly worked at Pabst Blue Ribbon Brewery as a Brewer machinist for many years. He retired from UnityPoint Health Methodist in the Dietary Department after many years of service. He was a past member of Henry Brown Lodge #22. He enjoyed cooking Southern Foods, entertaining and inviting people to eat. Daniel was a longtime member and Deacon at St. Paul Baptist Church for over 40 years where he was known as Deacon Ferguson. Daniel leaves to cherish his most precious memories, his loving wife of 53 years, Lillie Ferguson of Peoria; three sons, Jeffrey Ferguson of Galesburg, IL, Arthur Lee Otis (Betty) Simmons of Colton, CA and Carl Simmons of Los Angeles, CA; five daughters, Grace Ferguson of Tampa, FL, Dorothy Smith, Dottie Robinson, Rosie Johnson and Bettie Simmons-Carter all of Peoria; and a host of grandchildren, great grandchildren, great-great grandchildren, nieces, nephews, other relatives and friends. He is preceded in death by his parents, one daughter, Carmen Stear; two sons, Charles Ferguson and Willie Simmons; two brothers and seven sisters. Memorial services will be held at 11 am, Saturday, November 10, 2018 at St. Paul Baptist Church with a visitation beginning at 10:30 am. Pastor Deveraux Hubbard will officiate. Simons Mortuary is entrusted with arrangements. Online condolences may be made at SimonsMortuary.com.

The family of Deacon Daniel Ferguson created this Life Tributes page to make it easy to share your memories.