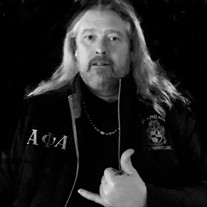 Daron Richard Tunks, a.k.a ‘D.T.’ of Peoria, IL and Conley, GA, was born on July 21, 1967, in Peoria, IL. He was the fourth child and only son born to the union of Richard Martin and Barbara Ann (Carlson) Tunks. Daron made his transition peacefully at his home in Conley, GA, on January 11, 2022. Daron was born and raised in Peoria, IL, where he received his education in District 150 schools. He attended Calvin Coolidge grammar school, several high schools before receiving a perfect score on the G.E.D. Exam, attended Bradley University and received his Bachelor’s degree from Robert Morris College. On January 23, 2000, Daron was baptized at Mount Zion Baptist Church by the late Rev. Alphonso Lyons, Jr. Daron was a member of St. Paul Baptist Church, under the leadership of Pastor Deveraux R. (Kristie) Hubbard, where he was a member of the Drama ministry. While attending Bradley University (B.U.), Daron became a renowned member of the Epsilon Kappa chapter of Alpha Phi Alpha Fraternity, Inc. as the Anchor #6 (line name: D.W.B.) of S.S. Determination in Spring, 1987. Daron was a proud member of the fraternity and loved to see the reaction on brothers’ faces when he would challenge them, as his ultimate goal was to make a new connection in the bond of brotherhood. Daron also met the love of his life, Shann Lindsey. They were married on June 1, 1995, in Peoria, IL. Together they have six children. Daron was a devoted and loving husband as well as a protective father. There was nothing he wouldn’t do for his family. Daron had the vision to have a business that he could leave to his sons one day. He was the sole owner and operator of Tunks & Sons Delivery. He started Tunks & Sons Delivery in 2003 as a furniture delivery company that evolved to an intrastate moving company in 2007. Daron loved to sing, gamble, play pool, and was an avid chess player. He was often late to the party, but the party did not start ‘til D.T. walked in! D.T. will be remembered as a protector of his family, a ‘wanna-be’ comedian to his friends, and the white boy with soul. Daron leaves to cherish his memory his wife and partner of 35 years, La Shann Monise Tunks (whom he affectionately referred to as ‘LuverGirl’), six children: Tyshell Tanae’ (San Antonio, TX), Kevin Benard (New York, NY), Jade Marie (Atlanta, GA), Deja Monise (Conley, GA), Daron Richard II and Jaron Calvin (both of Peoria, IL); eleven grandchildren, who affectionately called him ‘Big Daddy’: Maliyah Marie-Vonsae, Shyla Redina-Chante,’ Jhase Anthony Richard, Dominik Braxton-Lee, Melodi La’Rae, Lyric Ka’Mari Ann, Jewel Denise, JeQuez De’Audrey II, Daron Richard III, Nyla Joi Monise, and Jaron Calvin II; three sisters: Dawn Elizabeth (John) of Lawrenceville, GA.; Rose Marie (Gregory) of Carbondale, IL.; and Linda Kathleen (Michael) of Peoria, IL. He leaves a host of nephews, nieces, cousins, in-laws, surrogate sons who affectionately referred to him as ‘Pops,’ fraternity brothers and friends. He was preceded in death by his parents and grandparents. The Funeral Service will be held at 12:45 pm on Sunday, January 23, 2022 at St. Paul Baptist Church. Pastor Deveraux Hubbard will officiate. ***Per the family request - NO FLOWERS PLEASE*** In lieu of flowers, memorials can be made to: The Golden Torch Foundation of Kappa Pi Lambda chapter of Alpha Phi Alpha Fraternity, Inc. in Daron’s name or monetary donations can be sent via Zelle to: [email protected] Simons Mortuary has been entrusted with arrangements. Online condolences may be made at SimonsMortuary.com. The service will be live streamed on Simons Mortuary's Website or Facebook page at https://www.facebook.com/Simons-Mortuary-232095303487150 promptly AT THE TIME OF THE SERVICE. Due to Covid-19 restrictions, social distancing is encouraged to be consistent with recommendations from the National Funeral Directors Association (NFDA), funeral home directors have been instructed and should follow CDC guidelines on gatherings, including those directly related to funerals, visitations, or graveside services. *In an effort to mitigate the spread of COVID-19, we ask that everyone in attendance: wear a face mask and refrain from hugging, kissing and shaking hands (as hard as it is to see someone you care about and not touch them). *It is our responsibility as a Funeral Directors, to do everything we can to advise families in order to honor our beloved Families and to keep everyone as safe as possible. Thanks in advance for your cooperation! Thank you from the Tunks Family for your many cards, monetary donations, calls, texts and FB posts. Men of Alpha Phi Alpha Fraternity, Inc., the Ladies of Alpha Kappa Alpha, Sorority, Inc., Willie Watkins Funeral Home (Atlanta, GA) and Simons Mortuary (Peoria, IL). We truly appreciate each and every last one of you during this time of bereavement.

Send flowers to the Tunks family.