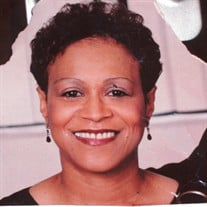 Ms. Deloris Abner, 58, of Antioch, Tennessee; formerly of Peoria, IL passed away on Thursday, June 14, 2018 at Alive Hospice Residence in Nashville, TN. Deloris was born on September 16, 1959 in Raymond, MS to Frank and Pearline (Hudson) Young. She was a graduate of Robert Morris College in Peoria. She was member of the Elks under Sojourner Truth Temple #1369 and past member of the TNBA Bowling League. She formerly worked at Carver Center under the leadership of Mr. Percy Baker and last worked as a Mortgage Underwriter at Regions Bank in Nashville, TN. Deloris is survived by three loving and devoted sons; Felix Abner of Chicago and Keenan Abner, Sr. and Jeremy Abner both of Peoria; one brother Blake Young of Pittsburgh, PA and three sisters, Maurine (Otis) Pendleton of Utica, Shirley (Lester) Hooker of Mobile, AL and Alberteen Young of Conyers, GA; six grandchildren, Lili Kawasaki, Aygeon Abner, Keenan Abner, Jr., Ambre Abner, Kyler Abner and Journee Abner; and a host of other relatives and friends. She is preceded in death by her parents. Funeral services will be held at 10 am on Saturday, June 23, 2018 at Morning Glory Community Church with a visitation at 9 am. Pastor Marlon Young, Sr., will officiate. Deloris will be laid to rest at Historic Springdale Cemetery. Simons Mortuary has been entrusted with arrangements. Online condolences may be made at simonsmortuary.com.

The family of Ms. Deloris "Lois" (Young) Abner created this Life Tributes page to make it easy to share your memories.

Send flowers to the Abner family.