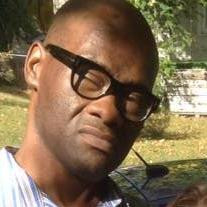 Mr. Deondrae “D.D.” McDonald, Sr., 45, of Peoria, IL passed away at 7:37 PM surrounded by his family on Monday, May 1, 2017 at Kindred Hospital Peoria. Deondrae was born on October 15, 1971 in Peoria, IL to Walter and Dorothy (Morris) McDonald. He married Deanna Todd July 6, 2016 in Peoria, IL. Deondrae leaves to cherish his most precious memory, his wife, Deanna McDonald, one son, Deondrae, Jr. four daughters, Deja McDonald, Alexis McDonald, Jamila McDonald and Ashley McKinney, three step daughters, Marisa Weech, Mikayla Weech, Rachel Weech, four sisters, Renanza McDonald-Wallace, Doris Smith, Sonya McDonald, Melinda McDonald, two brothers, Walter McDonald, Jr., Carlos McDonald, three grandchildren, Aralynn McDonald, Alyaha Newton, Nicole McKinney and a host of nieces, nephews and other relatives and friends. He is preceded in death by his parents and one sister, Cheryl Evans. Deondrae was a graduate of Manual High School Class of 1990, where he was a star football player and track athlete. Football was his first love. He later pursued his college education at IVCC College in Oglesby, IL on a football scholarship until his health declined. He was formerly employed at Caterpillar, Sharon Home Health Care and Bob Evans until his health failed him. Deondrae was a loving and devoted husband, father and brother. He was sweet as gold and a gentle giant. He was soft spoken and his smile and laughter would brighten any room. Many loved him for his talent in sports. He was called the “Mac Attack”. He was also loved for being non judgmental and kind to all. Funeral service will be held 11am, Monday, May 8, 2017 at Peoria Friendship M.B. Church with a visitation beginning at 10 am. Rev. Dr. Claude Russell, Jr., Pastor will officiate. Inurnment will be at a later date at Lutheran Cemetery. Simons Mortuary has been entrusted with arrangements. Online condolences may be made at SimonsMortuary.com.

The family of Mr. Deondrae "D.D." McDonald Sr. created this Life Tributes page to make it easy to share your memories.

Send flowers to the McDonald family.