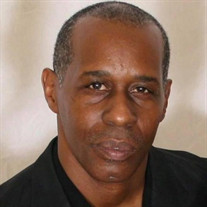 Mr. Derrick “Ricky” Jerome Lane, 60, of Peoria, IL went to be with the Lord at 3:11 pm on Tuesday, March 20, 2018 at UnityPoint Health Methodist, Peoria, IL. Ricky was born on September 22, 1957 in Bloomington, Illinois to Edward and Mary (Crowder) Lane. He was baptized in Pilgrim Baptist Church in Champaign, IL as a child. Ricky attended school in Champaign, Illinois and showed an early passion for music, learning to play drums, guitar and later bass guitar. As a child he played music with his brothers and later with his friends in various bands. Ricky was a professional drummer and toured the world with his brothers Chris and Mike. He enjoyed success as the drummer for his brother Micowave’s top 10 record tour and video. On May 24, 1996, Ricky married Yuko Yamaguchi in Nagoya, Japan. Ricky and Yuko moved back to America in the spring of 2004 to pursue his music in a journey that landed him in Atlanta, Las Vegas, Hawaii, Peoria, Greensboro and ultimately back to Peoria. Ricky led his own band, Dux Delux from the drums and also on guitar and bass and they were a staple in the Honolulu music scene, eventually winning a prestigious Battle of the Bands. Ricky was the most eclectic person you ever met. Equally comfortable playing Reggae music in his long dreads, throwing a cowboy hat on top of them and playing in a country band, back to a funk band and then to classic rock. And he was authentic on every level. Ricky had a great sense of humor and was the wittiest person in the room. But he could also at times be wild and crazy. Ricky was also the world’s biggest auto racing fan and enjoyed watching all kinds of motor sports. Ricky had a kind and loving spirit and was generous of himself and of anything he owned. Ricky’s passing leaves a tremendous void in the hearts of his family and in those who knew him. Through his tears he told his wife over and over “I’m just so blessed to be in this family”, but it was us who were blessed to have him in our family. He was truly one of a kind. Ricky leaves to cherish his most precious memory, his loving and devoted wife Yuko Lane of Nagoya, Japan, mother Mary Lane of Peoria, Illinois, six brothers, Christopher (Lisa) Lane of Valencia, California; Michael (Gayle) Lane of Columbus, Ohio; Herman (Jennifer) Bishop of Champaign, Illinois; Darnell Winfrey of Champaign, Illinois; Kenyada (Johsalyn) Muhammad of Indianapolis, Indiana; Antoine (Stephanie) Lane of Austin, Texas; three sisters, Lori (Garry) Robinson of Atlanta, Georgia; Fineez Muhammad of Champaign, Illinois and Brittany Lane of Champaign, Illinois; his father and mother in law, Yoshio and Kiyoko Yamaguchi of Nagoya, Japan and a host of nieces, nephews, cousins and other relatives and friends. A special thanks is extended to Georgia Thomas (special cousin) of Florissant, Missouri. And a special mention of his 2 precious dogs Mello and Solla. He was preceded in death by his father, Jerome Edward Lane, one sister, Cheryl Lane, maternal grandparents, Mary and Charles Connell and paternal grandparents, Dolly and Johnny Green. Funeral services will be held at 11 am on Saturday, March 31, 2018 at Rising Sun Christian Church with a visitation beginning at 10 am. Host Pastor Rev. John Gibson and Rev. Willie Jones will officiate. Simons Mortuary has been entrusted with arrangements. Online condolences may be made at SimonsMortuary.com.

The family of Mr. Derrick Jerome Lane created this Life Tributes page to make it easy to share your memories.

Send flowers to the Lane family.