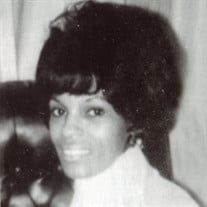 Mrs. Dora Lee Williams, 73, of Peoria, passed on at 10:25 am, Wednesday, May 3, 2017 at OSF St. Francis Medical Center. Dora was born on July 21, 1943 to Estella (Sledge) and Prentis Thomas, Sr. in Rosedale, MS. Dora married Clifford Williams on December 31, 1988 in Peoria. He preceded her in death on February 5, 2014. Dora leaves to cherish her memory, four sons, Kevin Porch, Brian (Barbara Vinson) Porch, Anthony Porch and Andre Porch all of Peoria; one daughter, Denise Porch; four sisters, Marie Walker, Maggie Harris and Mammie Thomas all of Peoria, and Arvella Hall of Chicago; three sister-in-laws, Etta Mae Thomas, Geraldine Thomas and Edna Thomas all of Peoria; 17 grandchildren; 15 great grandchildren and a host of other family and friends. Dora was preceded in death by her parents, husband, one sister, Estella Ellis; five brothers, Fred, L.B., Prentis, Jr., James and T.D. Thomas. Dora was baptized and grew up at Mt. Zion Church. She later joined St. Luke Baptist Church and was an active member for over 40 years where she served in the choir. She worked at Foster and Gallagher factory and later worked at Lutheran Social Services as a Homemaker. Dora was very loyal and devoted to her family and friends.

The family of Mrs. Dora Lee Williams created this Life Tributes page to make it easy to share your memories.