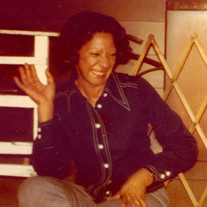 Mrs. Earma Lee Bailey, 84, of Peoria, IL passed away peacefully at 3:20 pm on Sunday, March 26, 2017 at her home surrounded by her family. Earma was born on July 30, 1932 in Chidester, Arkansas to Edgar and Annette (Williams) Burch. She married David Bailey in 1958 in Peoria, IL. He preceded her in death on November 17, 2013 after 55 years of marriage. Earma had a love for style and fashion developed during her many years working at such clothing stores as Spiegals, Hechts, Block and Kool and later Scharaski’s. Earma was a community servant and was very involved in the Peoria Community. She volunteered as an elections judge for many years; the Goose Lake Neighborhood Association and voter registration. Earma leaves to cherish her most precious memories her loving family; one niece whom she raised, Garry Annette Mitchell of Peoria; one great nephew, Calvin Brown of Peoria, who went on many trips with Earma and David; three step daughters, Mary Ruth Bailey-Hamilton, Helen Jean (Charles) Bailey-Bailey and Geraldine (Kenny) Bailey-Johnson all of Jackson, MS; two brothers, John Burch of Chidester, AR and Bobby Ray Burch of Peoria; three sisters, Eleanor Marie Wheeler of Peoria, Emma Foreman of Chidester, AR and Nettie Rigsby of Fountain, CO; and a host of nieces, nephews, other relatives and friends. She is preceded in death by three brothers, Maggness Burch, Melvin Burch and Ellis Burch and three sisters, Laura Hitt, Ola Fort and Gloria Bynum. Before her illness, Earma was a passionate Sunday school and faithful member of Holy Temple C.O.G.I.C. where funeral services will be held at 11 am, Saturday, April 1, 2017 with a visitation beginning at 10 am. Elder Eddie Bell, Jr. will officiate. Earma will be laid to rest at Parkview Cemetery. Simons Mortuary has been entrusted with arrangements. Online condolences may be made at SimonsMortuary.com.

Mrs. Earma Lee Bailey, 84, of Peoria, IL passed away peacefully at 3:20 pm on Sunday, March 26, 2017 at her home surrounded by her family. Earma was born on July 30, 1932 in Chidester, Arkansas to Edgar and Annette (Williams) Burch. She married... View Obituary & Service Information

The family of Mrs. Earma Lee Bailey created this Life Tributes page to make it easy to share your memories.

Send flowers to the Bailey family.