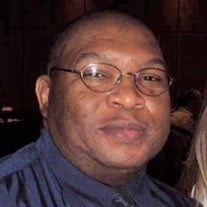 Mr. Eddie Lavell James, age 54, of Peoria, IL, passed away on Friday, April 9, 2021 at 1:42 pm at UnityPoint Health Methodist, Peoria, IL. Eddie was born on October 18, 1966 in Sikeston, MO to Eddie and Freddie (Walker) James. He married Judith Zeman on May 25, 2007 in DeKalb, IL. Eddie worked in housekeeping at ICC (Illinois Central College). He loved to read Marvel comic books and horror books especially the author Stephen King. Eddie loved reading so much that he had a collection of Marvel comic books and horror books, mostly Stephen King’s. Eddie leaves to cherish his most precious memories his wife, Judith James, his son, Christopher James both of Peoria, IL; his brother, Artis (Tiaria) James of Shreveport, LA; two sisters, Nancy Walker and Christine James both of Peoria, IL; and a host of aunts, uncles, other family and many friends. He is preceded in death by his parents, his great aunt, Christine James who raised him, one brother, Ronnie James and two sisters, Cassandra James and Leslie James. The family asks that you respect their privacy that they will have a private memorial service at a later date. Simons Mortuary was entrusted with arrangements. Online condolences may be made at SimonsMortuary.com.

The family of Mr. Eddie Lavell James created this Life Tributes page to make it easy to share your memories.

Send flowers to the James family.