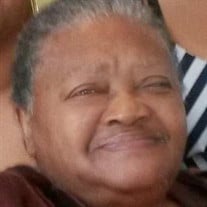 A Reflection of Life… A time to be born: Ms. Eddie Lee Walker was born the fourth child to the late Bluefus and Roberta (Newton) Davis on December 28, 1944 in Oak Grove, LA. A time to die: Eddie at the age of 74, transitioned at 2:30 PM on the afternoon of Sunday, October 20, 2019. The angel of silence descended from above to claim one of its own. Her tired, wretched soul fled from this painful and sorrowful world to a place of joy, peace and eternal rest. She was surrounded by her family when she passed. Eddie began her spiritual journey at an early age. Her love for the Lord grew as she attended and became involved in the church. She was a faithful member of Rose Hill Baptist Church where she was an usher and a cook with the kitchen ministry. She served at Rose Hill until she moved back South and joined the True Light Missionary Baptist Church in Ruleville, Mississippi under the Pastorate of Rev. Arthur Davis. She later returned to Peoria, Illinois. A time to plant: Eddie met and married Grant Walker and to this union two children were born; a girl and a boy; later came two more children, a girl and a boy, all whom she loved unconditionally. She was very caring, kind and helpful to her family and many others. Her spirit was vibrant and bright, and that brought smiles and love to all those she encountered. Early in her life Eddie formerly worked for Boise Cascade in Bensenville, IL as a packer. She was mostly a homemaker who loved to cook and dance. A time to pluck up that which is planted: Eddie leaves to cherish her most precious memories; two daughters, Linda (Stanley) Hughes and Yolanda Flowers both of Peoria, IL and an honorary daughter, Tina Young of Peoria; two sons, Grant Walker, Jr. and James (Chittaun) Walker of Peoria, IL; three brothers, Levi (Martha) Davis, Bluefus Davis and Arthur (Beverly) Davis all of Greenville, MS; two sisters; Bessie (Elton) Luckett of Colorado Springs, CO and Virginia Griffin of Peoria, IL; 11 grandchildren, 36 great-great grandchildren, all of whom she deeply cherished; a devoted friend, Gaynell Davis of Peoria, IL; and a host of nieces, nephews, other relatives and friends. She is preceded in death by her parents; one son, Jimmy Davis; one brother, Archie Davis; and one sister Mattie Coleman. Funeral services will be held at 11 AM, Saturday, October 26, 2019 at Sovereign Grace M.B. Church with a visitation at 10 AM where the host Pastor is Alvin Riley, Sr. Rev. Leroy Coleman of Chicago will officiate and Rev. Arthur Davis, Pastor of True Light and Jericho Baptist Churches in Mississippi will bring the eulogy. Simons Mortuary has been entrusted with arrangements. Online condolences may be made at SimonsMortuary.com.

A Reflection of Life&#8230; A time to be born: Ms. Eddie Lee Walker was born the fourth child to the late Bluefus and Roberta (Newton) Davis on December 28, 1944 in Oak Grove, LA. A time to die: Eddie at the age of 74, transitioned at 2:30... View Obituary & Service Information

The family of Ms. Eddie Lee Walker created this Life Tributes page to make it easy to share your memories.

A Reflection of Life…
A time to be born:
Ms. Eddie Lee Walker...

Send flowers to the Walker family.