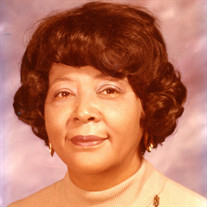 Mrs. Edna Earl Ware, 92, of Peoria, IL transitioned from this life to her heavenly home at 10:10 am on Monday, December 4, 2017 at her home surrounded by her family. Mother Edna was born on October 18, 1925 in Chicago, IL to Lovlec and Willie Mag (Stephens) Lemons. She married the love of her life, Clifford Ware on October 11, 1950 in Chicago, IL; celebrating 55 years of marriage he preceded her in death in 2005. They were blessed with one daughter, Denise Cliffann Ware. Mother Edna worked at Shure Bro’s Electronics, Dawson Child Development Center as a preschool teacher in Chicago, IL. She belonged to Chicago school Parent Teacher Association, Troy Street Block Club, Chicago Precinct Captain and Voter Registration Captain. Edna was a member of Little Brothers of the Elderly in Chicago, IL and Senior World in Peoria, IL. She retired from St. Vincent DePaul Day Care Center in Chicago. She loved traveling, arts and crafts and costume jewelry. She also loved all the little ones she taught in preschool. She was definitely a “people person” that never knew a stranger and who loved life. Mother Edna lived in Chicago all her life until moving to Peoria in 2010 due to her failing health. Mother Edna accepted Christ as her Lord and Savior at an early age. She was a faithful member of Carey Tercentenary A.M.E. Church in Chicago, IL for over 60 years. She served faithfully as missionary of the Annie P. Hughes Missionary Society. Edna joined Peoria Friendship M.B. Church with her daughter and son-in-law. Mother Edna leaves to cherish her most precious memories her daughter, Denise (Terry) Jackson of Peoria; one grandson, Michael Clifford Kirby, Sr.;great grand twins, Michael Clifford Kirby, II and Lila Grace Kirby; nieces, Carol and Crystal; nephews, David and Todd; and many cousins and friends to whom she was like a sister, aunt and mom. She is also preceded in death by her parents and two brothers, Clarence Lemons and Lawrence Lemons. Funeral services will be held at 12 Noon on Friday, December 8, 2017 at Peoria Friendship M.B. Church with a visitation one hour prior beginning at 11 am. Pastor Claude Russell, Jr. will officiate. Mother Edna will be laid to rest on Tuesday, December 12, 2017 at 10 am at Abraham Lincoln National Cemetery, 20953 W. Hoff Rd., Elwood, IL 60421 next to her husband. Simons Mortuary has been entrusted with arrangements. Online condolences may be made at SimonsMortuary.com.

Mrs. Edna Earl Ware, 92, of Peoria, IL transitioned from this life to her heavenly home at 10:10 am on Monday, December 4, 2017 at her home surrounded by her family. Mother Edna was born on October 18, 1925 in Chicago, IL to Lovlec and Willie... View Obituary & Service Information

The family of Mrs. Edna Earl Ware created this Life Tributes page to make it easy to share your memories.

Mrs. Edna Earl Ware, 92, of Peoria, IL transitioned from this...

Send flowers to the Ware family.