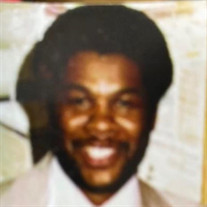 Mr. Elias “Alvin” O’Neal, 70, formerly of Peoria, IL, passed away at 2:34 am on Tuesday, September 2, 2020 at Kris-Leigh Assisted Living in Severna Park, Maryland. Elias, affectionately known as Alvin, was born on May 6, 1950 in Peoria, IL to Wiley, Sr. and Magnolia (McPeace) O’Neal. Alvin was an educator with the State of Maryland District Schools. Alvin was a 1969 graduate of Spalding High School where he played and was an elite basketball player all four years under Coach Ron Patterson. Alvin attended Ball State in Muncie, Indiana, later getting his undergraduate and Master’s Degrees from Morgan State University in Baltimore, MD. Alvin loved any kind of sports, but basketball was his love. He even playing basketball overseas. He was easy going and took his personality after his father, very jovial. Alvin leaves to cherish his most precious memories three sisters, Ineal Ross of Elgin, IL, Viola O'Neal-South and Shirley Spence both of Peoria, IL and a host of nieces, nephews, other family and friends who loved him. He is proceeded in death by his parents; four brothers, Levi O’Neal, Elijah O’Neal, Wiley O’Neal, Jr. and Calvin O’Neal and five sisters, Mae O’Neal, Mary Carroll, Adele Thomas, Odessa Plumlee and Gladys Ware. A Memorial service will be held at a later date. In lieu of flowers, memorials may be made to your local Alzheimer’s Association. Simons Mortuary has been entrusted with arrangements. Online condolences may be made at SimonsMortuary.com.

The family of Mr. Elias "Alvin" O'Neal created this Life Tributes page to make it easy to share your memories.