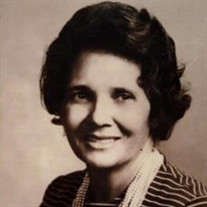 Elise Ford Allen, age 100 years and three months, passed away in her home on Wednesday, November 3, 2021, surrounded by her loving family. Mrs. Allen, a lifelong Peorian, was born on July 29, 1921, and raised in the River City. She was a well-known and loved Peoria icon and renowned civil rights activist. As founder of the Traveler Weekly Newspaper in 1966, she made history with its formation, making her the first African American woman to publish and edit a newspaper in Illinois. The newspaper gave her the vehicle to pursue and provoke a positive dialogue for change for the disadvantaged in the City. While one chapter of her legacy has closed, the newspaper continues to focus on the true principles of democracy and to keep it a living reality to all Americans. Because of her selfless devotion to uplifting the quality of life for the minority and less fortunate, Mrs. Allen has been honored with numerous awards and proclamations for her continuous service to the community. She was a longtime member of Heaven's View Christian Church. Elise Ford Allen comes from an illustrious birthright with ties to Virginia's historic Mount Vernon Estate through her 2nd great grandfather West Ford. Her grandfather, Major George W. Ford, was an original member of the 10th Cavalry (Buffalo Soldiers) Troop L and the first African American Superintendent of five of the country's National Cemeteries. Her father, Dr. Cecil Bruce Ford, was Peoria's first African American dentist, and her mother, Florence Harrison Ford, was a well-known seamstress. She married her husband, James O. Allen, an inventor and printing magnate, in 1939, and the couple raised ten children. She is survived by her ten children, James O. Allen Jr., Joy Stone, Angela (Homer) Henry, Barbara (Anthony) Randle, Tim (Patty) Allen, all from Peoria, IL, Carol Adams of Pasadena, CA, Linda (Mark) Hollis of Temecula, CA, Gregory Allen of San Rafael, CA, Janet Allen of Long Beach, CA, and Norman Allen of Myrtle Beach, SC.; special family, Helen Margaret Jackson and Forrest Holcomb, 38 grandchildren, 46 great-grandchildren, three great-great-grandchildren, a host of nieces, nephews, cousins, friends, and the dedicated writers for the Traveler who continue to provide excellence in journalism. She is preceded in death by her husband James, one son Matthew, a great-grandchild Carol Irene, a sister, Florence Pickett, two brothers, Bruce and Harrison Ford. A Celebration of life and memorial service is being planned when the flowers bloom in spring, at Camp Butler National Cemetery in Springfield, IL, where she played as a child. There, her earthly remains will rest with the ages along with her husband James, who died in 2000, her brother Bruce, her uncle Noel Ford, her parents, and her grandparents George and Harriet Bythewood Ford. Simons Mortuary has been entrusted with the arrangements. Online condolences may be made at simonsmortuary.com.

Elise Ford Allen, age 100 years and three months, passed away in her home on Wednesday, November 3, 2021, surrounded by her loving family. Mrs. Allen, a lifelong Peorian, was born on July 29, 1921, and raised in the River City. She was a... View Obituary & Service Information

The family of Mrs. Elise Ford Allen created this Life Tributes page to make it easy to share your memories.

Send flowers to the Allen family.