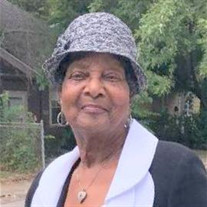 Ms. Estella Nichelson, 85, of Peoria, IL passed away peacefully at 1:20 AM at her home surrounded by her family on Saturday, February 2, 2019. Estella was born in Drew, Mississippi on August 18, 1933 to the late LeAndrew & Estella (Davis) Wallace. She married the late Joseph T. Nichelson in Mississippi. They moved to Memphis, Tennessee and later to Peoria, Illinois where she resided until her passing. Estella was employed by Bergner’s of downtown Peoria, Illinois for 35 years from which she retired. Mother Estella became a member of Morning Star Missionary Baptist Church under the leadership of the late Pastor Calvin Hightower and has maintained membership for over 70 years. She has served over the years as a Sunday School Teacher, Chairperson of the Women’s Day Committee and later became a member of the Mothers Board. Mother Estella leaves to cherish her precious memory her daughter, Prophetess GeorGia (Henry) Wallace-Swoope; five grandchildren, DeAndre’ L. (Priscilla) Wallace of Crystal Lake, IL, Milinka S. C. Wallace of Elgin, IL, Dur’Ville L. Wallace of Elgin, IL, Bryan J. (Rochelle) Nichelson, Sr., of Peoria, IL, KeAnna J. Nichelson of Peoria, IL. Seven great grandchildren, DeOndray Eubank of Champaign, IL, Tariah Nichelson of Peoria, IL, Bryana Nichelson of Collinsville, IL, Bryan Nichelson, Jr., of Peoria, IL, Aniyah J. Wallace of Hanover Park, IL, Kha’El Wallace Bey of Elgin, IL and Niemah G. Wallace of Arizona; and a host of nieces, nephews, other relatives and friends. She is preceded in death by her parents; her husband; a daughter, Ida Nichelson and two brothers, Tommie Lee Wallace and Willie Lee Wallace. A funeral service will be held at 11 am on Saturday, February 9, 2019 at New Morning Star M.B. Church with a visitation starting at 10 AM. Pastor Cleveland Thomas, Sr., will officiate. Estella will be laid to rest at Lutheran Cemetery. Simons Mortuary has been entrusted with the arrangements. Online condolences may be made at SimonsMortuary.com.

Ms. Estella Nichelson, 85, of Peoria, IL passed away peacefully at 1:20 AM at her home surrounded by her family on Saturday, February 2, 2019. Estella was born in Drew, Mississippi on August 18, 1933 to the late LeAndrew & Estella (Davis) Wallace.... View Obituary & Service Information

The family of Ms. Estella Nichelson created this Life Tributes page to make it easy to share your memories.

Send flowers to the Nichelson family.