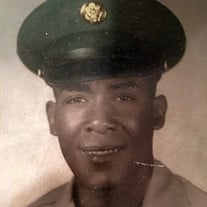 Mr. Eugene “Gene” James Richmond, 76, of Peoria, IL passed away at 10:06 am on Tuesday, April 3, 2018 at his residence. Gene was born on December 9, 1941 in Coushatta, LA to Hilton Sr. and Ruby (Sloan) Richmond. Gene served in the U.S. Army during the Vietnam War. During his teenage years, he loved to play basketball. Gene was an avid reader, collecting comic books back in the 1960’s with stack of books everywhere in his home. Gene loved to play pool, cards games and travel. Gene leaves to cherish his most precious memory his loving his daughter, Yolanda Robinson of Indianapolis, IN; three sons, Adam Coleman of Peoria, IL, Tony Washington of Stockton, CA and Kevin Fortune of California; four brothers, Chester Richmond and Hilton Richmond, Jr. both of Peoria, Larry (Gail) Richmond and Claude (Bobby) Bell both of Dallas, TX; three sisters, Vernell Bradshaw of Woodridge, IL, Carolyn Richmond and Aurdrey Jo Richmond both of Coushatta, LA; one grandson, Laron Holloway, Jr. of Indianapolis, IN and a host of nieces, nephews and other family and friends who loved him. He is preceded in death by his parents, two brothers, Oscar and Bobby Raye Richmond; three sisters, Laurie Ann Richmond, Nancy Washington and Willie “V” Hubble. Memorial services will be held at 11 am on Saturday, April 14, 2018 at Church of the Living God, Temple 130 with visitation beginning at 10:30 am. Vice Chief Bishop Leroy Smith will officiate. U.S. Military Honors will be rendered. Simons Mortuary has been entrusted with arrangements. Online condolences may be made at SimonsMortuary.com.

The family of Mr. Eugene "Gene" James Richmond created this Life Tributes page to make it easy to share your memories.

Send flowers to the Richmond family.