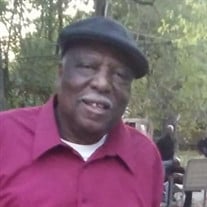 Mr. Eugene “L.M.” Ross, 80, of Peoria, IL passed away at 10:08 am on Sunday, December 23, 2018 at his residence. Eugene was born in Cruger, MS on July 29, 1938 to Cornelious (Randle) and Booker T. Ross, Sr. Eugene married Geneva Vessia Norman in Peoria, IL, she preceded him in death in 1978. Eugene worked as a Custodian for many years at OSF St Francis Medical Center before retiring in 2000. He loved fishing and spending time with family and friends. He always had a smile on his face. Eugene leaves to cherish his most precious memories his loving and devoted family; three daughters, Eugenia Norman of Peoria , Debra (Kidd) Jackson of Columbia, MO and Carmen (Bernard) Young of Peoria; one son, Anthony Norman of Peoria; two brothers, Booker T. Ross, Jr., of Peoria and Morris (Lula Mae) Ross of Chicago; three sisters, Willa Mae (Ted) Williams, Jeanette Jackson and Clara Ross all of Peoria; 16 grandchildren; a host of great grandchildren; and a host of nieces, nephews, other relatives and friends. He is also preceded in death by his parents; two brothers, one brother at an early age and J.B. Ross; three sisters, Lenora Freeman, Bernice Penn and Legertha Jackson; one grandson Michael Purifoy, Jr. Funeral services will be held at 11 am on Saturday, December 29, 2018 at Grace Baptist Church with a visitation beginning at 10. Pastor Claude White, Jr., will officiate. Simons Mortuary has been entrusted with arrangements. Online condolences maybe at simonsmortuary.com.

The family of Mr. Eugene "L.M." Ross created this Life Tributes page to make it easy to share your memories.

Send flowers to the Ross family.