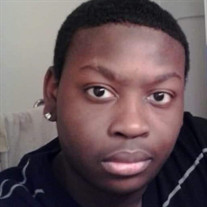 Mr. Evan O'Neill Buckner, 30, of Peoria, IL passed away peacefully at 4:03 PM on Wednesday, May 20, 2020 at OSF Saint Francis Medical Center in Peoria, Illinois. Evan was born on March 17, 1990 in Peoria, Illinois to Cecilia Buckner and Darrell Faulkner. He was engaged to Sara M. Ross to be married later this year. Evan was raised in Peoria, Illinois by his loving mother, Cecilia “CC” Buckner. At an early age he accepted Christ and was baptized. His education started at the Salvation Army Preschool continuing with Christ Lutheran School. His high school education began at Richwoods High School where he was accepted into the IB Program. He finished and graduated from Peoria High School in 2008 Peoria, Illinois. He also attended DeVry University pursuing study in Criminal Justice along with ICC studying Computer Science. Evan had an outstanding work ethic. But due to his illness he was not able to work as much. Although when his health allowed him to work, he did faithfully. His last place of employment was at FYE-For Your Entertainment Store in Northwoods Mall. He was smart, tech savvy and loved working with his hands. He would not give up until he figured it out. His spirit was humble, kind and a tenacious spirit. Evan while growing up was active in church beginning with Mt. Zion Baptist Church starting with Sunday School, Youth Choir and being a Junior Usher. Later he united with St. Paul Baptist Church in Peoria, Illinois where he was active with the youth department and taught Sunday School. Also, while growing up he was a part of the TSTM (Tomorrow’s Scientist, Technicians and Managers) with the Peoria Tri-County Urban League and Upward Bound where he received several honors. Evan loved spending time with his family, traveling, being outdoors and loved animals. Following in the footsteps of his Aunt Karen, he had several pets which included cats named Angel, Kratos, Diva and Artemis and his personal emotional support dog, Phoenix. Evan leaves to cherish his most precious memories his mother Cecilia “CC” Buckner and father Darrell Faulkner; his fiancée Sara M. Ross of Washington, IL; Aunts, Uncles and a host of cousins and friends. He is preceded in death by his grandparents Lushion and Clara Buckner, Billy Scott, Sr. (Uncle) and Karen Scott (Aunt). As an expression of sympathy, memorial contributions may be sent to Memorial Gift P.O. Box 6356 Peoria, IL 61601. A Private Memorial service will be held at 12 Noon on Wednesday, May 27, 2020 at Simons Mortuary. A visitation will be held 30 minutes prior beginning at 11:30 am. Pastor Deveraux Hubbard of St. Paul Baptist Church will bring words of comfort to the family. The memorial service will be live streamed on Simons Mortuary's Facebook page at https://www.facebook.com/Simons-Mortuary-232095303487150/ Simons Mortuary has been entrusted with arrangements. Online condolences may be made on SimonsMortuary.com.

Send flowers to the Buckner family.