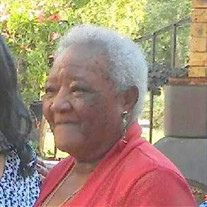 Sister Fannie Mae Maxwell, 75, of Peoria, IL transitioned into eternity at 9:45 am on Sunday, June 10, 2018 at OSF St. Francis Medical Center. Sister Fannie was born on March 9, 1943 in Williston, Tennessee to the late Willie and Elizabeth (Minor) Winfield. She attended Fayette County Training High School. She accepted Christ at an early age at St. Paul Missionary Baptist Church also located in Williston, TN. Fannie was united in Holy Matrimony to the late Louis Douglas and to that union they were blessed with two beautiful children, Harold Douglas and Carla Douglas. She later married Ezell Maxwell. Sister Fannie loved her church and church family and was very active in serving as an usher and other ministries of her church. She formerly worked at Sommerville Manufacturing Company and Fred’s Department Store in Sommerville, TN. Fannie moved to Peoria to be with family in 1996. While in Peoria she was employed by Proctor Retirement Home, St. Clara Home and volunteered with the Foster Grandparent Program at PCCEO. Fannie united with Peoria Friendship Baptist Church under the leadership of the Late Willie Williams, Sr., where she was very active with the mission, serving as Devotion leader and mailing cards to the sick and shut in. She later became a member of Mt. Sinai Baptist Church under the leadership of Pastor Joe A. Cherry where she loved her church, enjoyed worshiping and praising the Lord and served faithfully until her health failed. Sister Fannie leaves to cherish her most precious memories her wonderful and devoted children, one son, Harold (Linda) Douglas of Moscow, TN; one daughter, Carla Douglas Williams of Peoria, IL; 10 grandchildren; 16 great grandchildren; one sister, Gloria (Phillip) Meachem of Peoria, IL; two sisters-in-law, Lula Minor of Chicago and Dorothy “Doll” Winfield of Nashville, TN; and many nieces, nephews, other relatives and friends. She is also preceded in death by her parents; six brothers, David Minor, Henry Winfield, Willie A. Winfield, Elder Luther Winfield, Sr., Henderson Winfield and Arbor Winfield; and one sister, Missionary Lillie C. Johnson. A Peoria, IL visitation will be held on Wednesday, June 13, 2018 from 5:30 pm to 6:30 pm at Simons Mortuary. A funeral service will be held at 12 Noon on Saturday, June 16, 2018 at St. Paul Missionary Baptist Church at 4695 Highway 76 in Moscow, Tennessee with a visitation beginning at 11 am. Pastor Wayne Williams will officiate. Sister Fannie will be laid to rest at St. Paul Cemetery in Williston, TN. Simons Mortuary has been entrusted with Peoria arrangements. J. A. Lofties Funeral Home is in charge of arrangements in Tennessee. Condolences may be faxed to (901)465-3949.

The family of Ms. Fannie Mae Maxwell created this Life Tributes page to make it easy to share your memories.

Send flowers to the Maxwell family.