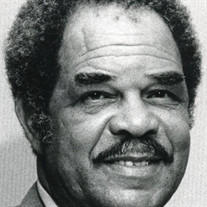 Mr. Ferdinand “Fred” Hillman, 94, of Peoria, IL passed away peacefully at 5:10 pm on Saturday, August 26, 2017 at Heartland Healthcare Center surrounded by his family. Ferdinand was born on December 21, 1922 in Earlington, Kentucky to Thomas and Jenette (Moore) Hillman. He accepted Christ at an early age and was baptized at Mt. Zion Baptist Church in Earlington, KY. He married Minnie B. Kirksey; she preceded him in death in 1988. Ferdinand was educated in the Christian County school system. Upon his graduation from High School, Ferdinand entered the US Navy in 1942 where he honorably served in World War II. During his military tour of duty, he received many awards including The American Campaign Medal, the European-African- Middle Eastern Medal and the World War II Victory Medal. Ferdinand was a proud life member of Legion 1151. Ferdinand leaves to cherish his most precious memories four daughters, Jacqueline Burns of Peoria, Wendy Jackson of California, Jenette (James) Hillman and Kimberly (Nero) Pack both of St. Paul, MN; four sons, Michael Kirksey of Peoria, Larry Miller of East St. Louis, IL, Edgar Thomas of Colorado and Brian Brown of Indianapolis, IN; 17 grandchildren; a host of great and great great-grandchildren; and his companion for many years, Grace Thomas. He is preceded in death by his parents and one son, Melvin Hillman. Funeral services will be held at 11 am on Friday, September 1, 2017 at Mt. Sinai Baptist Church with a visitation one hour prior to the service beginning at 10 am. Pastor Joseph Cherry will officiate. Ferdinand will be laid to rest at Historic Springdale Cemetery where US Navy Military Honors will be rendered. Tazewell County Area Ceremonial Team will render honors. Simons Mortuary has been entrusted with arrangements. Online condolences may be made at simonsmortuary.com.

The family of Mr. Ferdinand "Fred" Hillman created this Life Tributes page to make it easy to share your memories.

Send flowers to the Hillman family.