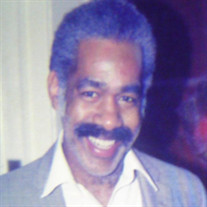 The life of Floyd T. Bell started as he entered this earth on February 22, 1945, when he was born in to this world by his mother Pearlie Mae Bell and father Floyd Tillman, both whom preceded him in death. Floyd departed this earth on April 10, 2017 at St. Francis Hospital in Peoria, Illinois. He was ill for many years; however, it was the last few years that his health started to decline. Floyd accepted Christ at an early age at Saint Paul Baptist Church in Peoria, Illinois. Floyd graduated from Manual High School and served time in the Army. He never married nor had any children, however, he accepted his nieces and nephews as his children, as well as his dogs, of whom he loved dearly. He had great friends of whom he shared his life with in Peoria, Chicago, and Evanston, Illinois. At the age of Fourteen, with his Aunt Iris Campbell, Floyd started working in the Catering business at Walker’s Catering Service in Peoria, Illinois. Later in life he moved to Chicago/Evanston and started his own catering business, which flourished for years. Floyd had standing contracts with the Marcellus Advertising Agency, American Medical Association, Illinois State Medical Society, Chicago Medical Society and catered for special events at the University of Chicago; Weddings, and Bar Mitzvahs. About 1987, Floyd moved back to Peoria and continued to do catering until he retired. With his love for gardening and creativity, he won the Iris Award and was featured in the Peoria Journal Star. Where they said: “it was like walking thru the garden of Eden” Floyd’s journey ended at the age of 72 on April 10, 2017, now joining his parents, brother, Burnis Brown; Aunts, Annie Steely, Lenora Porter and Iris (Frank) Campbell; Uncle, James Bell and cousin Doris Bell-Thrope. His memories will be cherished with his family sister, Iris A. Johnson of Evanston, her children Patricia., Kevin, Marvin and Debbie. His brothers of Peoria James Tillman (wife Izola) their daughter Kimberlea; Richard Tillman (wife Pat); and Andrew Bell and his kids Andrea, Jason and Rae; and children of Burnis Brown (wife Alberta) Burnis and Dana. Allen Fitzpatrick, who was like a brother, helped and cared for Floyd for years. His cousins in Peoria, Mary Campbell-Hooks, her kids Lori (Boston) and Malcom (Chicago) and Joyce Campbell-Edwards; St. Louis, Lois Laster, her daughter Lori and California, Areva Bell-Martin and Rodney Bell and Milwaukee, cousin Gloria Bell. And many other nieces, nephews, cousins and friends. Funeral services will be held at 11 am, Saturday, April 22, 2017 at Simons Mortuary Chapel with a visitation one hour prior beginning at 10 am. Vice Chief Bishop Leroy Smith will officiate. Floyd will be laid to rest at Lutheran Cemetery. Simons Mortuary has been entrusted with arrangements. Online condolences may be made at simonsmortuary.com.

The life of Floyd T. Bell started as he entered this earth on February 22, 1945, when he was born in to this world by his mother Pearlie Mae Bell and father Floyd Tillman, both whom preceded him in death. Floyd departed this earth on April... View Obituary & Service Information

The family of Mr. Floyd Tillman Bell created this Life Tributes page to make it easy to share your memories.

The life of Floyd T. Bell started as he entered this earth on...

Send flowers to the Bell family.