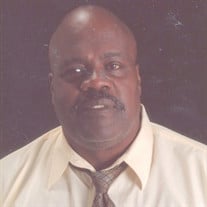 Mr. Freddie Lee Bonner, 68, of Peoria, IL transitioned from this life to the next at 1:24 pm on Friday, November 16, 2018 at his home surrounded by his loving and devoted family. Freddie was born on April 14, 1950 to Juanita (McCorkle) White. He was a 1974 graduate of Manual High School where he played football and was a wrestler. Freddie earned a BS Degree in Political Science from Illinois State University and a Master’s Degree in Criminal Justice. He married the mother of his children, Esther Jones Bonner on October 8, 1979. Freddie was a very determined and focused man, he put himself through college at ISU. He was a former officer at the Hanna City Youth Farm where he worked for years. He retired as a Probation Officer with the Peoria County Adult Probation Program, where he served for many years. Freddie loved spending time with his family and friends, whether it be playing his favorite game of Tonk or hanging with the grandchildren at Halloween giving candy out to children. Freddie was loved by all. Freddie leaves to cherish his most precious memories his loving and devoted family; eight daughters, Taihesha Bonner, Monique Bonner, Deshaunda (Robert Laney) Bonner, Kelli Bonner, Christeia Bonner and Kandis Bonner and Brieanna Bonner all of Peoria and Brittani Bonner of Woodridge, IL; two sons, Christopher Hyson-Bonner and Freddie Bonner, II both of Peoria; nine sisters, Patricia Griffin, Doris Griffin, Bernice Griffin, Linda Rose, Cynthia Griffin, Clara Gonzales, Gloria (Andrew) Flatt all of Peoria and Marilyn (Billy) Bacon of St. Louis, MO, and Ann (Jimmie) Smith of Canton, IL; six brothers, Herbert Griffin, James Kimbrough, Carl White, James White and Tyrone Brown all of Peoria and Gregory Griffin of Chenoa, WI; 39 grandchildren; 7 great grandchildren; and a host of nieces, nephews other relatives and friends. He is preceded in death by his mother, one sister, Renae Griffin, one brother, Samuel McCorkle and two grandchildren, Anyia Bonner and Envy Watson. Funeral services will be held at 10 am, Saturday, November 24, 2018 at Pilgrims’ Progress C.O.G.I.C with a visitation one-hour prior beginning at 9 am. Host Pastor is Elder James Rodgers and Elder Andrew Flatt will officiate. Freddie will be laid to rest at Lutheran Cemetery. Simons Mortuary has been entrusted with arrangements. Online condolences may be made at simonsmortuary.com.

Mr. Freddie Lee Bonner, 68, of Peoria, IL transitioned from this life to the next at 1:24 pm on Friday, November 16, 2018 at his home surrounded by his loving and devoted family. Freddie was born on April 14, 1950 to Juanita (McCorkle) White.... View Obituary & Service Information

The family of Mr. Freddie Lee Bonner created this Life Tributes page to make it easy to share your memories.

Mr. Freddie Lee Bonner, 68, of Peoria, IL transitioned from this...

Send flowers to the Bonner family.