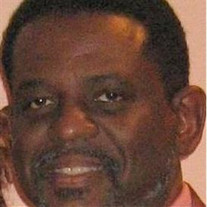 Mr. Garrison “Butch” Ravonne Collins, 63, of Peoria, IL, formerly of Flint, MI, passed away on Tuesday, February 28, 2017 at his residence. Butch was born on May 28, 1953 to James and Joann (Welch) Collins in Dyersburg, TN. Butch was a Navy Veteran. He was a Computer Technician at EDS. He was a former member of New Jerusalem Full Gospel Baptist Church, Flint, MI where he served in the Choir, Praise Team and Men’s Choir. He was also a member of the gospel group “Unconditional” in Flint, MI. He was a current member of St. Paul Baptist Church, Peoria, IL, where he served in the United Voices Choir, Men of Excellence Praise Team and the Drama Ministry. He loved cooking, taking pictures, watching sports on TV. He also loved to play Backgammon, Bid Wiz, Dominoes and Chess. Butch is survived by five sons, Jermaine (Valarie) Carpenter of Rochester, NH; Bryan (Lisa) Collins of San Jose, CA; Craig (Angela) Howard of Washington, DC; Quentin Howard of Las Vegas, NV: Damian (Kemmy) Collins of Peoria, IL; two brothers, Steve “Reno” (Brenda) Collins of Peoria and Jeff Luckado (Kim) of Waldorf, MD; two sisters, Nancy Luckado and Paula Luckado both of Flint, MI; fifteen grandchildren and a host of friends and family who adored him. He is preceded in death by his parents. Memorial services will be held at 11 am, Friday, March 10, 2017 at St. Paul Baptist Church, Peoria, IL with a visitation beginning at 10 am. US Navy Military Honors will be rendered. Pastor Deveraux Hubbard will officiate. A memorial service will also be scheduled in Flint, MI at a later date. Simons Mortuary has been entrusted with arrangements. Online condolences may be made at simonsmortuary.com.

The family of Mr. Garrison "Butch" Ravonne Collins created this Life Tributes page to make it easy to share your memories.

Send flowers to the Collins family.