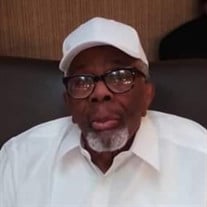 Mr. George Johnson, 84, of Peoria, Illinois, transitioned to his heavenly home at 8:50 am on Monday, December 27, 2021 at his residence. George was born in Birmingham, Alabama on March 9, 1937 to Samuel and Annie (Hill) Johnson. He married Daisy Kimbrough on September 16, 1976 in Peoria, IL. They were married for 41 years. George was a custodian in the schools. He like to play dominos, love to dance and smoke cigars. George was very affectionate to his friends at Senior World and his family. George leaves to cherish her most precious memories six sons, Orville (Freddie) Crumpton of Tracy, CA, James Kimbrough, John (Emma) Brown, Lonnie Kimbrough, Edward Kimbrough and Marvin Brown; four daughters, Bettina Johnson, Vanessa Johnson, Teania Johnson, Courtney Smith all of Peoria, IL and Earline Jones of Lexington, KY; four brothers, Robert (Doreen) Johnson of Birmingham, AL, Wayne (JoAnn) Johnson of Gary, IN, Luke Johnson of Birmingham, AL and Rufus (Brenda) Johnson of Peoria, IL; special friends, Pastor Arthur and Kathryn Dyes of Peoria, IL, host of grandchildren, great grandchildren and great greatgrandchildren and a host of nieces, nephews, other relatives and friends. He is preceded in death by his parents, wife, one daughter, Nina Moore, granddaughter, Feliza McElmurry, great granddaughter, Aniya Rose Johnson and three brothers and four sisters. A memorial service will be held at 10 am on Saturday, January 8, 2022 at St. Luke Missionary Baptist Church. Pastor Benjamin Nicks will officiate. Simons Mortuary has been entrusted with arrangements. Online condolences may be made at SimonsMortuary.com. Due to Covid-19 restrictions, social distancing is encouraged to be consistent with recommendations from the National Funeral Directors Association (NFDA), funeral home directors have been instructed and should follow CDC guidelines on gatherings, including those directly related to funerals, visitations, or graveside services. *In an effort to mitigate the spread of COVID-19, we ask that everyone in attendance: wear a face mask and refrain from hugging, kissing and shaking hands (as hard as it is to see someone you care about and not touch them). *It is our responsibility as a Funeral Directors, to do everything we can to advise families in order to honor our beloved Families and to keep everyone as safe as possible. Thanks in advance for your cooperation!

Mr. George Johnson, 84, of Peoria, Illinois, transitioned to his heavenly home at 8:50 am on Monday, December 27, 2021 at his residence. George was born in Birmingham, Alabama on March 9, 1937 to Samuel and Annie (Hill) Johnson. He married... View Obituary & Service Information

The family of Mr. George Lee Johnson created this Life Tributes page to make it easy to share your memories.