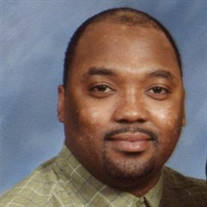 Mr. Glenn Edward Williams, 50, of Peoria, IL passed away on Monday, June 26, 2017 at OSF St. Francis Medical Center. Glenn was born on January 11, 1967 in Tiptonville, TN to Leon Sr. and Lula Mae (Gross) Williams. He was baptized at an early age at Willowdale Church of Christ in Elkhart, IN. He married Sheila Fisher on August 12, 1989. Glenn leaves to cherish his most precious memories his loving and devoted family; his wife Sheila Williams; his father, two sons, Tyler (Jewel) Williams and Brandon Williams; one daughter, Jada Williams all of Peoria; two sisters, Velma Ann (Roy) Jackson of Elkhart, IN; Yvette Williams of Peoria; one granddaughter, Zoie Hardimon of Peoria and a host of nieces, nephews, other relatives and friends. He is preceded in death by his mother; one brother, Leon Williams, Jr. Glenn worked for Dynegy Power Plant for years 24 years. Glenn enjoyed watching the Dallas Cowboys, cooking for family and friends, going on family trips and restoring old cars. Funeral services will be held at 11 am, Saturday, July 1, 2017 at Grace Baptist Church with a visitation beginning at 10 am. Pastor Claude White, Jr. will officiate. Glenn will be laid to rest at Historic Springdale Cemetery. Simons Mortuary has been entrusted with arrangements. Online condolences may be made to SimonsMortuary.com.

The family of Mr. Glenn Edward Williams created this Life Tributes page to make it easy to share your memories.