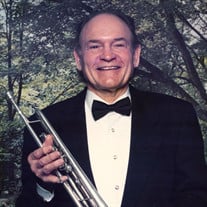 Mr. Grant St. Julian, Jr., 88, of Peoria, Illinois transitioned from this life at 12:55 PM on Thursday, March 7, 2019 at the Proctor Retirement Home Hospital. Grant was born on February 13, 1931 in Beaumont, Texas to Grant, Sr., and Leah (Hebert) St. Julian. Grant was a musician, scientist, author, lecturer, civil rights advocate, husband and father. He began playing trumpet at age 10, participated in junior high and high school bands, and received a full music scholarship for four years from Samuel Huston College, Austin, Texas. It was in college in 1948 when his passion for jazz began. In December of 1949 he was initiated into the Gamma Lambda Chapter of Kappa Alpha Psi Fraternity, Inc. After receiving his B.S. in biology, Grant served with distinction in the U.S. Army in Korea. Grant went on to earn a Master’s Degree in microbiology from the University of Texas at Austin. Grant's scientific career began in 1959 at the United States Department of Agriculture, Northern Regional Research Center in Peoria. At the Research Center, his major contributions were in the area of biological control of insect pests. Grant published 60 original scientific papers, and his work has been quoted in several books and review articles. Grant belonged to a number of national and international professional societies and received more than 30 honors and awards. He served on numerous local advisory boards, including the Illinois Arthritis Foundation, Heart of Illinois United Way, Peoria Housing Authority, Tri-County Urban League, the Salvation Army, and the Contemporary Art Center. Grant was also a longtime board member of The Heritage Ensemble. Grant was the chair of the Peoria Human Relations Commission from 1960-1964 and served as one of Peoria's Fire and Police Commissioners from 1964-1970. He was also a co-creator of the St. Julian Family Scholarship, which annually awards scholarship funds to a college-bound high school senior who is a member of the Peoria Tri-County Urban League’s Tomorrow’s Scientists, Technicians, and Managers Program. As a Life member of Kappa Alpha Psi Fraternity, Inc., Grant and eleven other brothers chartered the Peoria Alumni Chapter on November 17, 1973. In 1990, after 32 years at the Research Center, Grant retired and returned more fully to his love of music. Grant devoted himself to playing his trumpet and took up the flugelhorn. He played with various local Midwest groups, most notably the Illinois Central College Jazz Band. Grant’s relationship with the College led him to create the Grant St. Julian Keep Jazz Alive Scholarship, an annual, endowed scholarship for promising musicians. Music was not Grant’s only passion. He was a culinary artist who prepared all family meals and regularly showcased his talents at large holiday gatherings. He was known for his beautiful garden, filled with colorful flowers and carpeted with a lush lawn. Grant’s greatest passions in life, however, were his wife, Jeanne, and their three children, Grant III, an attorney in Dallas, Texas; Andrea Renee, an attorney in San Diego, California; and Tanya Suzanne, a training and development professional in Kansas City, Missouri. Grant met Jeanne at Huston-Tillotson College, Austin, Texas when the two were 19 and 22 years old respectively. Grant remained enamored with Jeanne for the next 63 years of their marriage and showed his love for her every day of their lives. The two adored each other. Grant was a dedicated and affectionate father whose children cherished him. In addition to being survived by his wife and children, he is survived by his daughter-in-law, Judy St. Julian, a son-in-law, Michael Alexander, two grandchildren, Andrew (Paige) St. Julian and Stacie (Peter) Paciorek, and five great grandchildren. He is preceded in death by his parents and one sister, Winona Elizabeth St. Julian Frank. The Funeral Mass will be held at 11 AM on Saturday, March 16, 2019 at Holy Family Catholic Church at 3720 N. Sterling Avenue. Father Giles Gilbert will be the Celebrant. Visitation at Holy Family will begin at 9 AM and will include a 10 AM musical tribute and a 10:30 AM Kappa Alpha Psi Fraternity, Inc., Ritual Tribute. In lieu of flowers donations may be made to any of the following: the Illinois Central College Grant St. Julian "Keep Jazz Alive!" Scholarship, Peoria Tri-County Urban League's TSTM St. Julian Family Scholarship or the Alzheimer's Association - Peoria Office. In lieu of flowers donations may be made to either of the following: Illinois Central College Grant St. Julian "Keep Jazz Alive!" Scholarship, Peoria Tri-County Urban League's TSTM St. Julian Family Scholarship or the Alzheimer's Association - Peoria Office. Simons Mortuary has been entrusted with arrangements. Online condolences may be made at Simonsmortuary.com

The family of Mr. Grant St. Julian Jr. created this Life Tributes page to make it easy to share your memories.