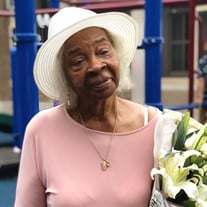 Mrs. Hattie Bell (McRae) Blue, 85, of Chicago, IL, grandmother of Dunlap, IL resident, Davina Sharee Frazier, passed away peacefully on January 16, 2019 at her home in Chicago, IL surrounded by her family. Hattie was born on June 15, 1933 in Raeford, North Carolina to Alexander, Sr., and Maggie Bell (Thomas) McRae. She came from a large family of 5 girls and 7 boys. Hattie was reared and educated in North Carolina. She accepted Christ at a young age at Rock Hill Baptist Church, Raeford, NC. She married James Bookert Blue, September 9, 1950. Early in their marriage they left North Carolina to move to New Jersey. They stayed there for a short time before moving to Chicago, making it their permanent home in 1955. Hattie was devoted to her family. She loved to cook, especially holiday meals. Hattie was very generous, took pride in her style of dress and you could count on her to have her nice smelling perfumes on. Hattie had a great work ethic. She worked as an assembler retiring in 1997 from United Remanufacturing Company after many years of service. Hattie leaves to cherish her most precious memories one daughter, Brenda Blue of Chicago, IL; 14 grandchildren; a host of great-grandchildren; and several great-great grandchildren; one brother, Alexander (his wife, Mary) McRae of East Orange, NJ; and many nieces, nephews, other relatives and friends. She is preceded in death by her parents; her husband, 3 children (Betty, Junior and Gwen); 6 brothers, Sandy McRae, John D. McRae, Thomas McRae, Sterling Covington, Robert Lewis Singertery and JW Singertery; 4 sisters, Doreen McLaurin, Daisy Dean Hough, Christina McRae and Lillie Frances McRae; one grandson and a great-granddaughter. A memorial service will be held at 1 PM, Saturday, January 26, 2019 at the Bohemian National Cemetery Chapel, 5255 N. Pulaski Road, Chicago, IL 60630. Minister Eddie Magsby will officiate. Online condolences maybe made at simonsmortuary.com. Bohemian National Cemetery is handling arrangements.

The family of Mrs. Hattie Bell (McRae) Blue created this Life Tributes page to make it easy to share your memories.

Send flowers to the Blue family.