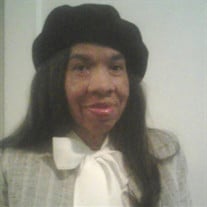 Ms. Izetta Christine Cottingham, 76, of Bloomington, IL transitioned from this life to her heavenly home at 9:09 AM on Sunday, July 7, 2019 at her son’s home surrounded by family. Izetta was born on May 26, 1943 in Charleston, West Virginia to Bessie Hollaway and Morris Beatty. The whole family moved to Detroit, MI in the 1954, where Izetta was educated. She worked for Dietrich Furs for many years. She later worked for Sheraton Hotels in their housekeeping department. Izetta had a kind heart and was a great caregiver to her family. She loved crocheting, sewing, designing dolls and home accessories and cooking. She will truly be missed by her family. When her health declined, she moved to Bloomington, IL to live with her son. She leaves to cherish her precious memories two sons, Roger Cottingham, Jr., of Detroit, MI and Willie (Lynn) Cottingham of Bloomington, IL; one daughter, Sheri Cottingham of Detroit, MI; five brothers, Richard (Louise) Neal of Detroit, MI, Joe (Sharon) Holloway of Pontiac, MI, Shalon Hollaway of Illinois, Leonard (Ruth) Beatty, Sr., of Detroit, MI, Charles Holloway of Michigan; four sisters, Shirley Beatty of Saginaw, MI, Naomi Holloway of Detroit, MI, Frances Robinson of Detroit, MI and Barbara Simpson of Detroit, MI; 13 grandchildren; 20 great-grandchildren; and a host of nieces, nephews, other relatives and friends. She is preceded in death by her parents; her husband, Roger Cottingham, Sr., two sisters, her twin sister, Rozetta Dismukes and Antoinette Holloway; and two brothers, Willie Gaddis and Ellis Neal. There will not be a funeral service. Arrangements were entrusted to Simons Mortuary. Online condolences may be made at simonsmortuary.com.

Ms. Izetta Christine Cottingham, 76, of Bloomington, IL transitioned from this life to her heavenly home at 9:09 AM on Sunday, July 7, 2019 at her son&#8217;s home surrounded by family. Izetta was born on May 26, 1943 in Charleston, West Virginia... View Obituary & Service Information

The family of Mrs. Izetta Christine Cottingham created this Life Tributes page to make it easy to share your memories.

Send flowers to the Cottingham family.