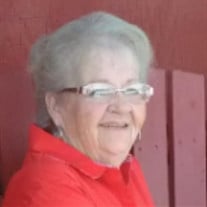 Jacqueline Darlene Parrish, 78, of Washington IL passed away at 7:41 pm on Monday, July 24, 2017 at OSF St. Francis Medical Center surrounded by her family. Jackie, as she was affectionately known, was born on March 30, 1939 in Hannibal, MO to Marjorie Darlene (Akright) and Harold Clarence Sturtevant. She married Darrell Wayne Parrish on October 12, 1958 in Hannibal, MO. The family moved to Peoria, IL in 1967. Her husband preceded her in death on May 7, 2014. Jackie worked as surgical tech for many years at Methodist Hospital. She later worked at Kroger in the bakery, retiring there after many years of service. Jackie was kind and loving. She had such a sweet personality. She loved gardening, crafts, needlepoint, shopping and holidays spent with her kids and grandchildren. Jackie leaves to cherish her most precious memories two sons, Darren (Teri) Parrish of Greenview, IL and Michael (Jayma) Parrish of Wilmington, IL; two daughters, Dena Lynn (Kevin) Martin of Gaston, SC and Jodi Short of Washington, IL; three brothers, Roddy (Pam) Sturtevant of Hannibal, MO, Rickey (Patty) Sturtevant of Peoria and Khoy (Julie) Sturtevant of Jacksonville, IL; 16 grandchildren and a host of great grandchildren, nieces, nephews, other relatives and friends. She is preceded in death by her parents; her beloved husband of 56 years; her son, Harold Christopher Parrish and two brothers, Demps and Butch Sturtevant. A memorial service will be held at 2 pm on Saturday, July 29, 2017 at James O’Donnell Funeral Home, Inc., 302 S. 5th St, Hannibal, MO 63401. Pastor Wesley Foster will officiate. Simons Mortuary has been entrusted with arrangements. Online condolences may be made at SimonsMortuary.com.

Jacqueline Darlene Parrish, 78, of Washington IL passed away at 7:41 pm on Monday, July 24, 2017 at OSF St. Francis Medical Center surrounded by her family. Jackie, as she was affectionately known, was born on March 30, 1939 in Hannibal, MO... View Obituary & Service Information

The family of Mrs. Jacqueline "Jackie" Darlene Parrish created this Life Tributes page to make it easy to share your memories.

Send flowers to the Parrish family.